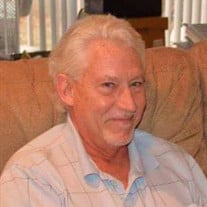 James �Jim� E. Petersen, age 62, of Brodhead, WI, passed away unexpectedly, with his dog Comet by his side, on Monday, May 30th, 2016, in Mifflinville, PA. He was born on November 20th, 1953 in Monroe, WI, the son of Edmund James and Mildred Marie (Hable) Petersen. Jim graduated from Monroe High School in 1971 and proudly served his country in Operation Desert Storm as a part of the 1158th division in the Army National Guard. He was a member of the VFW Post 6858 of Brodhead. He went on to drive for Frito Lay, own and operate County Line Beverage, Brodhead, and was most recently employed by A&H Trucking, Footville, WI. Jim enjoyed bowling, golfing, boating, and riding his motorcycle. He loved spending time on the road and at home with his best friend Comet. Jim is survived by his wife, Andrea, Cody, WY; step-children, Amanda (Tyler) Whitledge, Racine, WI, Chad (Sarah) Nenneman, Kansas City, MO; and his grandchildren, Gage and Elsie Nenneman and Owen Whitledge. He was preceded in death by his parents. A Memorial Service will be held at 11 a.m., Friday, June 10, 2016, followed by military rites, at the D.L. NEWCOMER FUNERAL HOME, BRODHEAD, WI, with Pastor Krystal Goodger officiating. Visitation will be held from 9:30 a.m. until time of services at the funeral home. In lieu of flowers, memorials can be made to the family.

The family of James "Jim" E. Petersen created this Life Tributes page to make it easy to share your memories.