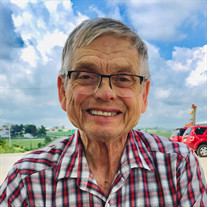 Brodhead - James William Ginther, age 85, passed away peacefully on July 27, 2021 surrounded by his family after losing his long battle with Alzheimer’s disease. He is survived by his wife of 57 years, Freda Ginther; daughter Kandie Flannery, son-in-law Steve Flannery, grandsons Jason Flannery, Casey Flannery and Skylar Flannery and great granddaughter Ella Flannery; son Mitch Ginther and daughter-in-law Joanne Barnes; brother William Ginther and sister-in-law Marge Ginther; daughter Donna Ginther, son-in-law Rodger Erickson, grandson Bryce Erickson, granddaughter Adele Erickson; daughter Kristan Ginther, son-in-law Daniel Cubias, grandson Zakary Cubias. Jim started working at Curtis Candy company milking and showing dairy cows leading to his love of cattle that lasted throughout his life. He worked at Chrysler Corporation in Belvidere, Illinois for 26 years as a manager. There he invented the Ginther bar, a device that assisted with the car assembly line. In addition to these full-time jobs, his real love was farming. For 47 years, Jim raised crops; gardened; and tended to a menagerie of animals, including cattle, goats, chickens, horses and any stray who happened upon the best 50 acres in Rock County. One of the first additions to the farm was a grade milk cow named Moo who he milked by hand. On that same farm, Jim built the house with his own hands which stands there today. He instilled a love of nature, hard work and animal husbandry in anyone who met and knew him. Jim will be remembered by his family for his great sense of humor, love of obscure country musicians, his strength of character, and enjoying the simple pleasures in life. It can be said of Jim that he never took a direct route to any location in his life because the journey was just as important as the destination. Funeral services will be performed at D.L. Newcomer Funeral Home, 1105 E. 9th Avenue in Brodhead, Wisconsin on Friday July 30, 2021 at 2:00 PM. A visitation will also take place at the funeral home from 1:00 PM to 2:00 PM. Memorial donations may be made in Jim Ginther's name to Alzheimer’s Association and Agrace Hospice (https://www.agrace.org/donate/). www.dlnewcomerfuneralhome.com 608-897-2484

Brodhead - James William Ginther, age 85, passed away peacefully on July 27, 2021 surrounded by his family after losing his long battle with Alzheimer&#8217;s disease. He is survived by his wife of 57 years, Freda Ginther; daughter Kandie Flannery,... View Obituary & Service Information

The family of James William Ginther created this Life Tributes page to make it easy to share your memories.

Send flowers to the Ginther family.