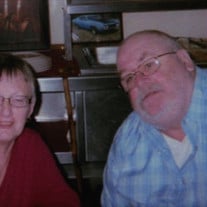 James N. Keehn, age 71. of Byron, IL, formerly of the Brodhead area, passed away on Friday, August 18, 2017, at Crimson Pointe Senior Living, Rockford, IL. He was born on July 21, 1946 in Stoughton, WI, the son of Orrin and Charlene (Gempler)... View Obituary & Service Information

The family of James Nelson Keehn created this Life Tributes page to make it easy to share your memories.

Send flowers to the Keehn family.