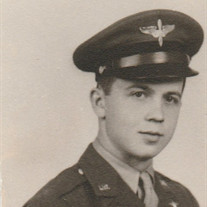 James W. Loften, age 92, of Albany, WI, passed away on Friday, July 1, 2016, at the Monroe Clinic Hospital, Monroe, WI. He was born on August 17, 1923 near Moorefield, WV, the sixth of ten children born to Harness and Kurnie (Shook) Lofton. He graduated from Stephens City High School, Stephens City, VA in 1943. He married LaDean Marie Butt of Janesville on June 26, 1948. She passed away on May 3, 2004. Jim enlisted in the Army Air Corps when Pearl Harbor was attacked and was immediately called to active service after graduation. He passed the necessary requirements and was assigned to the Air Corps Aviation Cadet Flight training program as a pilot trainee. He was discharged in March of 1946. Jim worked for the Milwaukee Railroad in Janesville and Beloit, WI, retiring in September of 1984 after 38 years of service. Jim's first love was his wife and family. Next came hunting, fishing and traveling. He was a volunteer Hunter Education and Firearm Safety instructor for the Wisconsin Department of Natural Resources for 34 years, graduating over 3000 students. He was an active member of the Albany United Methodist Church, a life member of the National Rifle Association, Wisconsin Rifle and Pistol Association, Green County Conservation League, North American Hunting Club, and the Albany Historical Society. He was also a member of American Legion Post 144 of Albany. Jim is survived by two sons, Daniel (Barbara), East Troy, Bruce (Kathy) Albany; a brother, Omer and a sister, Alice, both of Winchester, VA and a sister Pauline of Moorefield, WV; five grandchildren, Travis (Dayna) Loften, Amanda (Josh) Firgens, Wesley, Adam and Kenneth Loften; and four great-grandchildren. He was preceded in death by his parents, wife, three brothers and three sisters. Funeral services will be held on Friday, July 8, 2016, at the Albany United Methodist Church with Pastor Brad Mathers officiating. Burial will be in Hillcrest Cemetery, Albany, WI, with Military Honors. Visitation will be held from 5 p.m. until 7 p.m., Thursday, July 7, 2016 at the Albany United Methodist Church. In lieu of flowers, memorials may be made to the Albany Historical Society or American Legion Post 144, Albany, WI.

James W. Loften, age 92, of Albany, WI, passed away on Friday, July 1, 2016, at the Monroe Clinic Hospital, Monroe, WI. He was born on August 17, 1923 near Moorefield, WV, the sixth of ten children born to Harness and Kurnie (Shook) Lofton.... View Obituary & Service Information

The family of James Wesley Loften created this Life Tributes page to make it easy to share your memories.

Send flowers to the Loften family.