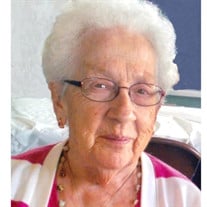 Janet L. �Grandma Jan� Thommen, age 85, of Monroe,, WI, formerly of Juda, WI, passed away unexpectedly on Wednesday, March 22, 2017, at Aster Assisted Living, Monroe, WI. She was born on January 3, 1932 in Juda, WI, the daughter of Ivan and Mary (Davis) Arnsmeier. She married Ernest H. Thommen on March 19, 1955 at the Evangelical United Methodist Church, Monroe, WI. He passed away on May 8, 2012. Janet graduated from Juda High School in 1950. She and her husband owned the South Wayne Cheese Co., moving to Juda in 1982. She worked at the Juda Truck stop as a waitress for many years. She was a member of the Zion United Methodist Church, Juda, Women of the Moose, Monroe, WI, Historic Cheese Center, volunteered for St. Clare Hospital Women�s Auxiliary, and was a member of the Juda Alumni Committee. Janet enjoyed bowling, gardening, canning, making soup, and going to sporting events. She especially loved writing letters and sending greeting cards for all occasions to her beloved family and friends. Janet is survived by special nephews and niece that she considered to be her children; Heidi (Steve) Miller, Brodhead, Phillip (Sue) Trotter, Kim (Sue) Trotter, both of Juda, Scott (Bill) Trotter, Winston-Salem, NC; Godmother to 24 and several other nieces and nephews. She was preceded in death by her parents, husband, 3 sisters, Bernice Stuckey, Carrie Zimmerman, Joyce Trotter, 4 brothers, Raymond, Rodney, Marion, and David, in infancy, and a niece, Tami Trotter Francois. Funeral services will be held at noon on Saturday, March 25, 2017, at the Zion United Methodist Church, Juda, WI, with Pastor Vicky Brantmeyer officiating. Burial will be Stateline Cemetery, rural Juda. Visitation will be held from 10 a.m. until time of services at the church.�

The family of Janet Louise (Arnsmeier) Thommen created this Life Tributes page to make it easy to share your memories.