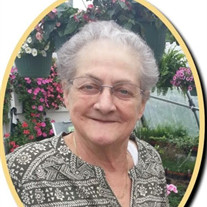 Janet Ruth Niedermeier, age 72, peacefully passed away at home with her family beside her the morning of March 18th, 2016, after a courageous battle with cancer. Although it was not an easy journey, her determination and tenacity pulled her through. Janet was born September 20th, 1943 in Aurora, Illinois to her parents, Evelyn (Dycus)& Dale VanBrocklin. She graduated from Beloit Memorial High School in 1961 and then business school in Rockford, Illinois. She married her loving husband, Duane, on November 27th, 1971 in Orfordville, WI. Together they had a daughter, Debbie Jean. Janet & Duane built their house together and dairy farmed for many years just outside of Brodhead. Janet was the Town of Avon Treasurer for over 20 years. Through the years, Janet also worked at Adams Corn Curl, Werner Electric and Ogden Manufacturing. She enjoyed many years of dancing with her husband, snowmobiling, bowling, fishing "up north" with family, deer hunting in the "ladies' woods", cooking & baking with her daughter, and pizza cruises with friends on their pontoon boat. She was an Avon 4-H leader and Rock County 4-H fair superintendent and took great pride and enjoyment in helping with her daughter's business. Those left to cherish Janet's memory include, her beloved husband of 44 years, Duane, her daughter and son-in-law, Debbie Jean Niedermeier-Wartgow and Gregg Wartgow; Half-Sister, Maureen Reed of Camden, DE; Brothers and Sisters-in-law, Dorothy Smith of Beloit, WI, Robert (Jane) Niedermeier of Brodhead, WI, Pat (Howard) Robinson of Chetek, WI, Betty Niedermeier of Genoa, IL, Judy Niedermeier of Beloit, WI, Donna Niedermeier of Brodhead, WI, Jeanette Kisling of Milton, WI; Special friends, Tony & Terry Peters and their family; and several cousins, nieces, nephews and friends. She was preceded in death by her Parents, Mother & Father-in-law, Iva & Clifford Niedermeier, Brother, Charles VanBrocklin, Sister & Brother-in-law, Judy & Lynn Egan, Brothers-in-law, Roger Niedermeier, Clifford Niedermeier, Jr, and David Smith and Special Aunt, June Niedermeier. Funeral services will be held at 11 a.m., Tuesday, March 22, 2016, at the D.L. NEWCOMER FUNERAL HOME, BRODHEAD, WI, with Pastor Donald Adams officiating. Burial will be in Avon Community Cemetery following services. Visitation will be held Monday evening from 4 p.m. until 7 p.m. at the funeral home. Janet would be honored to have her Pallbearers be Tony Peters, Allen Peters, Curt Shaw, Dwayne Shaw, Eugene Niedermeier and Steve Niedermeier. Janet's family wishes to thank Agrace Hospice and their caring nurses & staff, Dr. M. Kahn and the wonderful gals in the Mercy Oncology Dept. and Dr. Kevin Bluemel and his nurses. Her journey was made a better one because of your compassion & friendships. Your memory is a keepsake from which we'll never part. God has you in His arms, We have you in our hearts.

Janet Ruth Niedermeier, age 72, peacefully passed away at home with her family beside her the morning of March 18th, 2016, after a courageous battle with cancer. Although it was not an easy journey, her determination and tenacity pulled her... View Obituary & Service Information

The family of Janet Ruth (VanBrocklin) Niedermeier created this Life Tributes page to make it easy to share your memories.