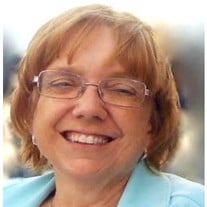 Jean M. Prestbroten, age 67, of Orfordville, WI, passed away peacefully at Agrace Hospice, Janesville, WI, on Monday, March 20, 2017. She was born on April 7, 1949 in Oconomowoc, WI, the daughter of Warren and Mary Lou (Voigt) Ebert. She married her best friend, Sven Prestbroten, on May 4, 1968 in Oconomowoc. Jean and Sven settled in Orfordville in 1976. Jean attended the University of Wisconsin � Rock County for English and Journalism, which she landed on the Dean's List. She was a member of the Orfordville EMS and worked for the Parkview School District as an aide. She later became a newspaper reporter for The Beloit Daily News, The Janesville Gazette, The Wisconsin State Journal and two local newspapers. Jean was a member of the Brodhead United Methodist Church. She enjoyed camping, traveling to Europe and across the United States. Jean was an accomplished author of the book, The Last Train West. The book won first place at the Los Angeles Book Festival in 2013. Survivors include her husband of 49 years, Sven; one daughter, Sarah (Robert) Ritter of Beloit, WI; three grandchildren, Ashley, Chris and Megan Ritter; three sisters, Jane Bryant, Mary Montclair and Gail (Joe) Maurer; a brother, Thomas (Coleen) Ebert, several nieces, nephews and godchildren, and her service dog Marley who will greatly miss her. She was preceded in death by her parents, a brother, Charles �Harpo� (Robin) Ebert, and a sister Joyce in infancy. A Celebration of Life service will be held at 11 a.m., on Saturday, April 1, 2017, at the United Methodist Church, Brodhead, WI, with Rev. Krystal Goodger officiating. WI. Visitation will be held from 10 a.m. until time of services at the church.

The family of Jean Mary (Ebert) Prestbroten created this Life Tributes page to make it easy to share your memories.