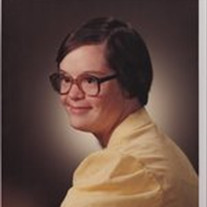 Brodhead - Jean M. Ruchti, age 48, Stoughton, formerly of Brodhead, passed away on Tuesday, September 18, 2012, at the Stoughton Hospital. She was born on January 4, 1964 in Monroe, WI, the daughter of Adolph �Fritz� and Arlene M. (Searles) Ruchti. Jean attended the former Green County Normal School and worked at Greenco, both of Monroe. She graduated with the Brodhead Class of 1983. Jean was very outgoing and loved being with family and friends. She also enjoyed doing needlepoint. Jean is survived by her siblings, Walter Ruchti, Mauston, WI, Bill (Carrie) Ruchti, Brodhead, Thomas Ruchti, Janesville, John (Jayne) Ruchti, and Merry (Bill �Bear�) Lawrence, both of Evansville. Funeral services will be held at 11a.m., Monday, September 24, 2012, at the Congregational United Methodist Church of Christ, Brodhead, with Rev. R. Tiffany Bates officiating. Burial will be in Greenwood Cemetery, Brodhead. Visitation will be held from 10 a.m. until time of services at the church. Memorials may be made to the Special Olympics Wisconsin, P.O. Box 8564, Madison, WI 53708.

The family of Jean M. Ruchti created this Life Tributes page to make it easy to share your memories.

Send flowers to the Ruchti family.