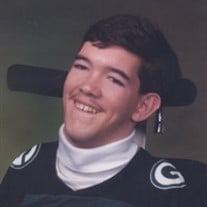 Jerry �J.J.� Lee Day Jr., age 35, passed away on Sunday, July 14, 2013, at Lee Lane Group Home, Janesville. He was born on December 1, 1977 in Janesville, the son of Brenda Leigh (Weeks) and Jerry L. Day Sr. �JJ� was involved in Special Olympics, was an avid Packer fan, loved outings, and Harley Davidson rallies. He is survived by his father, Jerry L. Day Sr., Orfordville; a sister, Shelly (Aaron) Zimmerman; nephews, Brendan and Brady Zimmerman, all of Brodhead; and several aunts, uncles and cousins. He was preceded in death by his grandparents and his mother on February 25, 2001. Memorial services will be held at 11 a.m., Friday, July 19, 2013, at the D.L. NEWCOMER FUNERAL HOME, BRODHEAD, WI, with Cal Schaver officiating. Burial will be in Greenwood Cemetery, Brodhead. Visitation will be held from 6 - 8 p.m., Thursday, July 18, 2013, at the funeral home. A memorial fund will be established.

The family of Jerry "J.J." Lee Day Jr. created this Life Tributes page to make it easy to share your memories.