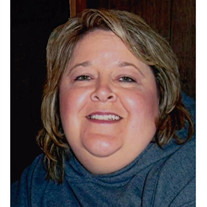 Jodi Lynn Thompson, age 50, of Brodhead, passed away on Monday, November 14, 2016, at her home. She was born on May 17, 1966 in Monroe, WI, the daughter of Tom and Sherry (Williams) Kuebli. She married Arne Thompson on October 10 1987 in Juda, WI. Jodi graduated from Brodhead High School in 1984 and attended MATC, studying court reporting. She was a member of the United Methodist Church, Brodhead and the Brodhead Jaycee's. Jodi had been a child care provider for many years and had also worked at the Sugar River Raceway, Brodhead. She was very civic minded, being involved in many community projects, and volunteering at pre-school. Jodi loved all animals, especially her pets, and often donated to area shelters and helped with many rescues. Jodi enjoyed traveling and being with family and friends. She is survived by her husband, Arne, Brodhead; her parents, Tom and Sherry Kuebli, Brodhead; her in-laws, Arnold and Aleta Thompson, Janesville; her children, Andrew Thompson, Brodhead, Aly (Ashleigh Colson) Thompson; Janesville; siblings, Missy (Al) Timm, Jeff (Kim) Kuebli; nieces, Lily Kuebli, Katelyn and Brittany Thompson, Mariah Corell; nephews, Trent and Aaron Kuebli; great-nephews, Lane and Grant Kuebli; a sister-in-law, Tisha (Blaine) Corell, Janesville; and her best friends, Natalie Ponkauskas and Tammy Slocum, both of Brodhead. She was preceded in death by her paternal and maternal grandparents and brother, Michael Kuebli. A Memorial Service will be held at 11 a.m. on Saturday, November 19, 2016, at the United Methodist Church, Brodhead,WI, with Pastor Krystal Goodger officiating Burial will be in Greenwood Cemetery, Brodhead, WI. Visitation will be held from 4 p.m. until 8 p.m., on Friday, November 18, 2016, at the D.L. NEWCOMER FUNERAL HOME, BRODHEAD, WI. A memorial fund will be established. $(document).ready(function(){ var ifr = $("#06f00856208d84n0"); ifr.data("ratio", ifr.attr("height")/ifr.attr("width") ); ifr.removeAttr("width").removeAttr("height"); // Resize the iframes when the window is resized $(window).resize(function(){ var width = ifr.parent().width(); ifr.width(width).height(width * ifr.data("ratio")); }).resize(); });

The family of Jodi Lynn (Kuebli) Thompson created this Life Tributes page to make it easy to share your memories.

Jodi Lynn Thompson, age 50, of Brodhead, passed away on Monday,...