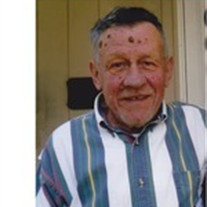 Albany - John Arthur Aeschliman, age 82, of Albany, passed away peacefully at Collinwood Elderly Care Home, Brodhead, on May 13, 2012. He was born on August 11, 1929 in Barneveld, WI, the son of John and Alice (Rikli) Aeschliman. He married... View Obituary & Service Information

The family of John Aeschliman created this Life Tributes page to make it easy to share your memories.

Send flowers to the Aeschliman family.