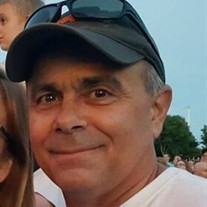 Obituary The world lost one of its sweetest souls on Friday, September 25, 2020 when John Michael Ihrig passed away at the age of 58.   John was born on July 9, 1962 to Jack and Rosalie Ihrig. By all accounts, his was an idyllic and happy childhood. John loved sports from the time he could walk and excelled at many of them. He played quarterback and center field for Lourdes Academy’s football and baseball teams and was named MVP of both teams his senior year, as well as lettering multiple years in football, baseball, and track. John graduated from Lourdes in 1980 and, post-high school, played rec softball, bowled, lifted weights competitively and, most of all, loved running. He often said he “found his joy and best ideas” when running and competed in the Twin Cities Marathon (3:31:31) and many local 5Ks. Later, John took up bicycling, and truly enjoyed spending a Saturday afternoon racking up 30 miles on his Trek.   John spent his entire life in Oshkosh and always swore there was no other place on earth he’d rather be. An avid fisherman, he felt very lucky to live next to “the best fishing lake in Wisconsin.” From May through October, John and his best friend (his dad Jack) could be found most days fishing for walleye, perch, and blue gill on Lake Winnebago.   John was united in marriage on February 8, 1997 to Suzanne Gove. Suzanne did manage to convince John there was, in fact, life outside of Oshkosh, and the two took many memorable vacations over their 23-year marriage, which John begrudgingly admitted he enjoyed. A few of his favorites included Arizona, twice, for Brewers Spring Training; South Dakota, Wyoming, and Montana; Hawaii to celebrate their 10th wedding anniversary; Cleveland for the Rock and Roll Hall of Fame, Christmas Story House, and Brewers/Indians ball games; and his last vacation in 2018 to New York City. We never made it to Gettysburg, honey, but we will someday.   John was an employee of Oshkosh Truck and member of UAWL 578 for 32 years before retiring in January 2019. As dedicated and hardworking an employee as he was, there was no doubt the part of the job he enjoyed most was playing sheepshead with coworkers during lunch.   John was an enthusiastic and loyal supporter of the Green Bay Packers and Milwaukee Brewers. He also loved Johnny Cash, animals of all kind (they all loved him back, hence the nickname St. John of Assisi) and TV/movie westerns (the older the better). And absolutely no one was better at quoting arcane dialogue from “Seinfeld” than John.   John is survived by his wife, Suzanne Ihrig; mother, Rosalie Ihrig; sisters Jill Wara and Jane (Bennett) Olson; brother Jim (Sharon) Ihrig; nieces Mindy (Jason) Maciolek, Megan (Hunter) Clark, Elizabeth Ihrig, Sarah Ihrig, Megan (Philip) Reynolds and Rachel (Samuel) Orr ; nephews, David (Maria) Olson, Caleb Wara, Daniel Olson, Lucas Smedema, Adam (Susan) Smedema and Quinn Gove; Brothers-in-law, David (Janice) Gove and Joel (Cathy) Gove, Sisters-in-law, Kim Gove Stiegman and Maureen (Bill Paulius) Olson; and other family members and friends; and fur-babies Rachel, Sheldon, and Sookie.   John was preceded in death by his father, Jack Ihrig, who no doubt greeted John on the other side with two fishing poles in his hands; his father-in-law and mother-in-law, Ryan and Darlene Gove; and fur-babies Max, Nick, Jordan, Phoebe, and Lucas.   A Mass of Christian Burial will be held on Saturday, October 3, 2020 at St. Jude the Apostle Parish – St. Vincent Church, 1225 Oregon Street, Oshkosh, WI, 54902. John’s service will be held from 1:00 p.m. to 2:00 p.m. and will be preceded by a visitation from 12:00 p.m. to 1:00 p.m. Burial at Calvary Catholic Cemetery will follow immediately after the service. Because of COVID-19 restrictions, face mask and social distancing guidelines will be adhered to.   Suzanne Ihrig extends her appreciation for the attentive and professional care John received from the medical staffs at Ascension Medical Group, Mayo Clinic, and Generations Hospice; for the compassionate and loving care provided to John by the staff of Azura Memory Care during the last month of his life; and to Jack and Rose Ihrig, who were John’s “morning caregivers” five days a week and showed everyone, every day, what it means to be loving parents.   Memorials have been established in John’s name with St. Jude’s Children’s Hospital (stjude.org), Oshkosh Area Humane Society (oahs.org), and The Association for Frontotemporal Degeneration (theaftd.org). To send sympathy gifts to the family or plant a tree in memory of John Michael Ihrig, please visit our tribute store.

Obituary The world lost one of its sweetest souls on Friday, September 25, 2020 when John Michael Ihrig passed away at the age of 58.   John was born on July 9, 1962 to Jack and Rosalie Ihrig. By all accounts, his was an idyllic and happy... View Obituary & Service Information

The family of John Michael Ihrig created this Life Tributes page to make it easy to share your memories.

Obituary
The world lost one of its sweetest souls on Friday,...

Send flowers to the Ihrig family.