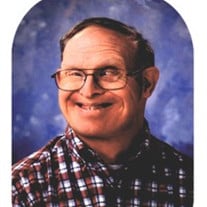 �John P. Kundert, age 60, passed away on Tuesday, May 13, 2014, at Azura Memory Care, Beloit, WI. He was born on May 19, 1953 in Monroe, WI, the son of Robert A. and Jessie (Badertscher) Kundert. John had worked at GreenCo Industries, Inc. of Monroe for several years. He attended the Smiley School in rural Albany and Special Education School in Monroe. He was a member of St. Rose of Lima Catholic Church, Brodhead. John had been actively involved with the Apostolate to the Handicapped, Inc., Monroe, and was very proud to be one of �Campion�s Champions� He participated in the Special Olympics and attended Badger Camp for many years. John collected mini-cars, watches and bracelets and enjoyed riding his bike, swimming, bowling, and watching �The Dukes of Hazard� He is survived by his siblings, Kathryn Kundert, Elmhurst, IL, Teresa (Tom) Lokrantz, Janesville, WI, Robert (Beth) Kundert, Dubuque, IA, and an uncle, Walter Smiley, Springfield, VA. He was preceded in death by his parents. A memorial service will be held at 11:30 a.m., Saturday, May 17, 2014, at the D.L. NEWCOMER FUNERAL HOME, BRODHEAD, WI, with Father Michael Klarer presiding. Burial will be in Greenwood Cemetery, Brodhead. Visitation will be held on Saturday from 9:30 a.m. until 11:30 a.m. at the funeral home. Memorials can be made to the Apostolate to the Handicapped, Inc, GreenCo Industries, Inc., or the Wisconsin Badger Camp.�

The family of John Phillip Kundert created this Life Tributes page to make it easy to share your memories.

Send flowers to the Kundert family.