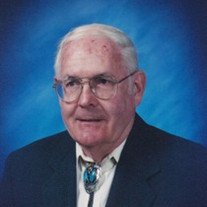 John D. Timm, age 84, of Brodhead, passed away on Tuesday, August 19, 2014, at Wood Crossing Nursing Home, Brodhead, Wisconsin. He was born on December 6, 1929 in Brodhead, the son of John C. and Mabel A. (Heath) Timm. He married Mary C. TenEyck on November 14, 1948 in Arlington, Wisconsin. John D. graduated from Brodhead High School in 1947. He partnered with his father at the Timm Motor Co., later being joined by his brother Bruce in the business. He was one of the founders of the Brodhead Jaycees. He enjoyed boats, cars, motorcycles, attending auto auctions, playing baseball, cats, dogs, and especially being with his grandchildren. John is survived by his wife Mary and son, Alan (Melissa) Timm; a brother, Bruce Timm, all of Brodhead; two grandchildren, Zachary (Ashley Glass) and Meghan; and a great-granddaughter, Lydia. He was preceded in death by his parents, a son, John Peter Timm, and brother, Donald Timm. Memorial services will be held at 11:30 a.m., Saturday, August 23, 2014, at the D.L. NEWCOMER FUNERAL HOME, BRODHEAD, WI. with Rev. David Frey officiating. Burial will be in Greenwood Cemetery, Brodhead, WI. Visitation will be from 10 a.m. until time of services at the funeral home on Saturday. A memorial fund will be established.�

The family of John D. Timm created this Life Tributes page to make it easy to share your memories.