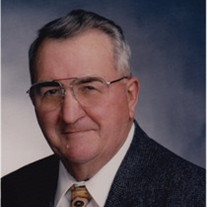 Juda - John F. Wideman, age 92, of Juda, WI, passed away peacefully at Pleasant View Nursing Home, Monroe, WI, on Saturday, July 26, 2014. He was born on February 2, 1922 in Jefferson Township, Green County, WI, the son of Claude and Ruth (Milks) Wideman. He married Pearl Reigle on February 10, 1946 in Brodhead, WI. John attended Prairie Valley Grade School, graduated from Juda High School in 1939 and was a lifetime member of St. Paul�s Lutheran Church in Rock Grove, Illinois. John lived and farmed his entire life in Green County, living the past 63 years in the rural Juda area. In the Spring of 2013, John and Pearl moved to Monroe. He served as past president of the Green County Boots and Saddle Club as well as a member of the Green County Mounted Patrol under Sheriff Wilbur Deininger. He was also a past member of Loyal Order of Moose Lodge #754 and a past 4-H club horse leader. John�s love wasn�t only for his family, but also included horseback riding and pony team driving. Surviving are his wife, Pearl; daughter, Patsy (Lyle) Thorp of Lyndon Station, WI; son, Jeffrey (Dee Indergand) Wideman of Monroe; grandchildren, Pamela (James) Frazier of Baraboo, WI, Shawn Thorp of Juda, and Blane Thorp of Reedsburg, WI; great-grandchildren, Josey and Jaymee Frazier, Devin Thorp, Brittany Meinert, Caitlyn and Treyvor Thorp. He was predeceased by his parents, and a sister, Elizabeth (Frank) Koch. Funeral services will be held at 11:30 a.m., Tuesday, July 29, 2014, at the D.L. NEWCOMER FUNERAL HOME, BRODHEAD, WI, with Pastor Peder Johanson officiating. Burial will be in Greenwood Cemetery, Brodhead, WI. Visitation will be held from 10 a.m., Tuesday, until time of services at the funeral home. Memorials may be made to The Juda Nine Angels Scholarship Fund. John, a lifelong resident of Juda, will be deeply missed by his family and friends.�

The family of John Frank Wideman created this Life Tributes page to make it easy to share your memories.

Send flowers to the Wideman family.