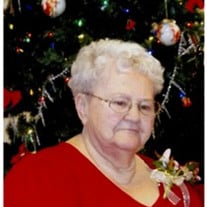 Judith E. Scheider, age 71, of Brodhead, passed away on Monday, October 27, 2014. She was born on May 30, 1943 in Browntown, WI, the daughter of Melvin and Ethel (Mann) Kuhl. She married Wayne E. Scheider on December 28, 1962 at Martintown Community Church, Martintown. Judith was a member of the Brodhead Garden Club. She enjoyed watching cooking shows, the Green Bay Packers and the U.W.-Badgers. She enjoyed spending time with her family, especially her grandkids. She is survived by her husband Wayne; her children, Dan and Ryan Scheider, Tammy (Paul) Sweeney, all of Brodhead, Mike Scheider, Rockford, IL, Mary (Randy) Tracy, KY; an aunt, Marge Rabe, Brodhead; grandchildren, Jenna and Kristie Sweeney, Amanda Scheider, Ryan and Dawson Scheider, all of Brodhead, Christopher, Samantha and Kody Scheider, of Rockford, IL; great-grandchildren, Braydan, Colton, Autumn, Kaylee, Zander, Hailey and many nieces and nephews. She was preceded in death by her parents, and a brother David in infancy. Funeral services will be held at 11 a.m., Friday, October 31, 2014 at the D.L. NEWCOMER FUNERAL HOME, BRODHEAD, WI, with Mr. Cal Schaver officiating. Burial will be in Greenwood Cemetery, Brodhead. Visitation will be held on Thursday from 5-7 p.m. at the funeral home.�

The family of Judith Elaine (Kuhl) Scheider created this Life Tributes page to make it easy to share your memories.