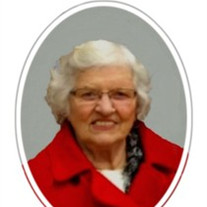 June M. Niedermeier, "June Bug" age 81, of Brodhead, WI, passed away on Friday, August 22, 2014, at Mercy Hospital, Janesville, WI. She was born on July 5, 1933 in Avon Township, Rock County, WI, the daughter of Henry G. and Nettie May (Hawkins) Swenson. She married Shirl F. Niedermeier on June 27, 1959. He passed away on January 5, 1979. June had worked for Cap Jaggi Cheese Co., Bjork�s Dog House, both of Brodhead and General Motors of Janesville, retiring in 1986. She was a member of St. Peter�s Lutheran Church, Brodhead, and UAW Local 95. In her younger years, June was �The Brodhead Pickle Queen.� She loved cooking, gardening, vacations to Northern Wisconsin, going out to eat, particularly Friday Night "�Fish Frys," the Packers, the Badgers, the Brewers, and Brodhead High School sports. Her real love was being with family and friends - especially her GRANDCHILDREN. June is survived by a daughter, Brenda (Kirk) Douglas; a brother, Harold (Sharon) Swenson; three grandchildren, Megan, Ethan, and Taylor Douglas, all of Brodhead; and her special friend, Dale Clark, Janesville, WI. She was preceded in death by her parents, husband, and three sisters, Nina Davidson, Alice Nolty, and Thelma Bliss. Funeral services will be held at 11 a.m., Wednesday, August 27, 2014, at St. Peter�s Lutheran Church, Brodhead, WI, with Pastor Marcus Neumann officiating. Burial will be in Greenwood Cemetery, Brodhead, WI. Visitation will be held on Tuesday from 5 p.m. until 8 p.m. at the D.L. NEWCOMER FUNERAL HOME, BRODHEAD, WI, and from 10 a.m. until time of services at the church on Wednesday. A memorial fund will be established.�

The family of June M. (Swenson) Niedermeier created this Life Tributes page to make it easy to share your memories.