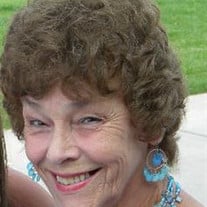 Albany- Katherine "Kathy" Ann Kauk, age 74 passed away on Tuesday, September 19, 2017 at home surrounded by her family after a short term diagnosis of cancer. Kathy was born on February 27th, 1943 in Monroe WI, the daughter of Arlo and Dorothy (Goodman) Webster. She married Richard Kauk Sr. on August 6th, 1960 at the little Brown church in Iowa. They farmed pretty much their entire marriage in Brodhead, Evansville and then finally in Albany when they purchased their farm in�1973 near Attica. Kathy wasn't only a farmer, she�started working at Monroe Clinic, Apco, worked�as a cook for many years at Dorman's/Beatrice, Gemplers/Duluth Trading and then later at Wolfe until a work injury caused her not to be able to�work any longer. If anyone knew Kathy- everyone knew that she was one of Elvis Presley's biggest fans. Everyone enjoyed seeing her MANY rooms of Elvis when visiting. The greatest thing of Kathy known though was, that she took pride in her family and every Sunday for many years she cooked her Sunday dinners. This was the family day where everyone was welcome--family, friends and friends of friends, nobody ever came unwelcomed or went home hungry. Kathy definitely was a family woman and loved spoiling all her grandchildren. As the family grew she even had to add on to the house to make room for Christmas and all the presents that she bought for all her children, spouses, grandchildren and great grandchildren. She also enjoyed playing cards and playing�Euchre and 500 and�spent many moments at the ballparks watching her husband�and then, later, her children play�ball. Kathy is survived by her seven children, Maribeth (Rick) Schwartzlow, Daniel (Deb) Kauk, Richard Jr. (Dick) (Tracy) Kauk, Steven (Becky) Kauk, Kirby (Debbie) Kauk, Shianne (Dan) Broughton, Sherri Cleasby all of Albany, WI, 16 grandchildren and 8 great grandchildren, her 6 siblings Gayle Bull (Mineral Point), Karen (Connie) Wehinger (Monroe), Von Roselli (Clear Water, FL), Rosie (Bud) Weiser (New Glarus), Jim (Ruth) Webster (Burlington), Evie Gilbert (Nevada), Sister in laws Phyllis Picket (Brodhead), Margaret Kauk (Albany), Jean (Paul) Clark (Brodhead) and many nieces, nephews, cousins and other relatives. Kathy was preceded in death by her husband Richard Kauk�on August 18, 2002, her parents�Arlo and Dorothy�Webster, her maternal and paternal grandparents, her father-in-law Phillip Kauk and�Herbert Striker, Mother-in-law Mary Striker, Brother-in-laws�Jim Bull, Paul Gilbert, Glen Picket, John (Jack) Kauk, Dave Peterson, Sister-in-laws Katherine Peterson, Margaret Striker, nieces and nephews and other relatives. In lieu of flowers, memorials can be directed to the family. Funeral services will be held at the Albany Lions Club, 402 N. Cincinnati St, Albany on Saturday, September 23, 2017 at 7:00 PM. A visitation will also be held at the Lions Club on Saturday from 3:00 PM to 7:00 PM. The D.L. Newcomer Home in Brodhead is assisting the family.

Albany- Katherine "Kathy" Ann Kauk, age 74 passed away on Tuesday, September 19, 2017 at home surrounded by her family after a short term diagnosis of cancer. Kathy was born on February 27th, 1943 in Monroe WI, the daughter of Arlo and Dorothy... View Obituary & Service Information

The family of Katherine Ann Kauk created this Life Tributes page to make it easy to share your memories.

Send flowers to the Kauk family.