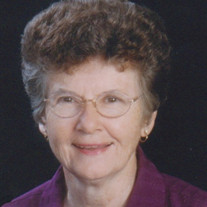 Kathryn J. Schneider, age 84, a lifelong resident of Brodhead, passed away on Sunday, October 9, 2016, at Woods Crossing Nursing Home, Brodhead, WI. She was born on October 1, 1932 in Brodhead, the daughter of Jay and Hazel (Pinnow) Dunwiddie. She married the love of her life, Duane Schneider, on October 25, 1952 at the United Methodist Church, Brodhead. Kathryn attended Brodhead schools and graduated from Brodhead High School in 1950. Before starting a family, she had worked at the Pierce Music Co., Brodhead. She was an active member of the United Methodist Church, Brodhead, where she served in many different areas. She was a member of the UMC Women, 3F's member and was the funeral luncheon coordinator, where she served for over 30 years. Kathryn was also a lifetime member of the Brodhead Historical Society where she served on the Board of Directors, museum committee and program committee. In 1990, she and five of her friends, started a clogging group, known as The Cloggin' Grandmas. They entertained at schools, nursing homes, civic organizations and took part in many parades. She received the Good Samaritan award in 1997 for her volunteer work with the White Gift, the bloodmobile, and her service as a member of the Brodhead Water and Light Commission and library board. Kathryn loved to do needlework, cross-stitch, knitting, crocheting and sewing. She is survived by her husband of almost 64 years, Duane; children, Steve (Paula), Brodhead, Jayne (Steve) Platts, Cross Plains, WI, Robert (Christine), Alpena, MI, and her beloved grandchildren, Stephenie (Jake) Peterson and Aaron Schneider, both of Brodhead. She was preceded in death by her parents, a brother, Robert, and mother-in-law and father-in-law, Chris and Florence Schneider. Funeral services will be held at 11 a.m., Wednesday, October 12, 2016, at the United Methodist Church, Brodhead, WI, with Pastor Krystal Goodger officiating. Burial will be in Greenwood Cemetery, Brodhead, WI. Visitation will be held from 5 p.m. until 7:30 p.m., Tuesday, October 11, 2016, at the D.L. Newcomer Funeral Home, Brodhead. Memorials may be made to the United Methodist Church, Brodhead or the Monroe Clinic Hospice.�

Kathryn J. Schneider, age 84, a lifelong resident of Brodhead, passed away on Sunday, October 9, 2016, at Woods Crossing Nursing Home, Brodhead, WI. She was born on October 1, 1932 in Brodhead, the daughter of Jay and Hazel (Pinnow) Dunwiddie.... View Obituary & Service Information

The family of Kathryn J. (Dunwiddie) Schneider created this Life Tributes page to make it easy to share your memories.