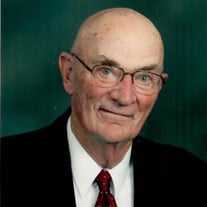 Obituary Kenneth Henry Meyer, age 89, of Brodhead, Wisconsin died on Saturday, January 18, 2020.  He was born on January 3, 1931 in Mundelein, Illinois, the son of George and Edith (Wirtz) Meyer.  He was a graduate of Libertyville Illinois High School and a 1952 graduate of Illinois State University, Normal, Illinois.  He served in the Marine Corps from 1952 until 1955 and was stationed in Korea.  He was a member of Illinois Farm Bureau, Wisconsin Farm Bureau, VFW Post #6858, a supervisor on Spring Valley Town Board since 1977, and an active member of the Brodhead United Methodist Church where he served on many committees over the years. Ken taught school in Diamond Lake, Illinois and Reno, Nevada before going into farming with his uncle in the Mundelein area.  He farmed in the Brodhead area from 1970 until he retired in 1995.  He also helped out during tax season at his brother-in-law’s tax service in Libertyville, Illinois.  Ken especially enjoyed golfing with his friends and was a lifetime fan of the Chicago Cubs and Chicago Bears. Ken is survived by his wife of 49 years, Sandra Meyer of Brodhead, a daughter Bonny (Edison) Blake of Elkhorn, WI, two sons, Leigh (Victoria) Meyer of Santa Rosa, CA, James (Chris) Meyer of Bloomington Illinois, seven grandchildren, Iris, Wilder and Spencer Blake, Madison James, Logan and Bryce Clarenson, Caleb Meyer and 4 great grandchildren, Mason, Wyatt and Parker Clarenson and Vincent James. He was preceded in death by his parents, aunts, one uncle, George and his sister Helen (Carl) Kakenmaster of Grayslake, Illinois. In lieu of flowers, memorials can be directed to the Leukemia and Lymphoma Society Wisconsin Chapter or the Agrace Hospice of Janesville. Funeral services will be held at the DL Newcomer Funeral Home, 1105 E. 9th Avenue in Brodhead on Saturday, January 25, 2020 at 2:00 PM.  A visitation will also take place at the funeral home on Saturday from 12:30 PM until the time of services.  Burial will conclude at the Greenwood Cemetery with military honors.             www.dlnewcomerfuneralhome.com   608-897-2484   To send flowers to the family or plant a tree in memory of Kenneth Henry Meyer, please visit our floral store.

Obituary Kenneth Henry Meyer, age 89, of Brodhead, Wisconsin died on Saturday, January 18, 2020.  He was born on January 3, 1931 in Mundelein, Illinois, the son of George and Edith (Wirtz) Meyer.  He was a graduate of Libertyville Illinois High... View Obituary & Service Information

The family of Kenneth Henry Meyer created this Life Tributes page to make it easy to share your memories.

Send flowers to the Meyer family.