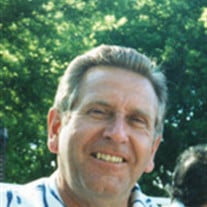 Brodhead - Kenneth Dean Severson, age 77, passed away at his home on July 25th, 2010 after a courageous battle with cancer. Ken was born on March 6, 1933 in Argyle, WI, the son of Alvin and Clara ( Evenstead) Severson. He is survived by his beloved wife, Mary (Robertson) Severson of 55 years, his son, Kurt and daughter-in-law Terri (Hawkins) Severson, Madison, WI; his daughter Carmen Davies, two grandchildren Carson and Kyra Davies; Rockford, IL; a brother, Victor Severson, Arena, WI, two sisters, Ruth Miller, Rockford, IL, Margaret (Ralph) Neuenschwander, South Wayne, WI, his grand dogs Jack and Charlie and many, many dear friends. He was preceded in death by his parents, four brothers, and two sisters. Ken and Mary united in marriage in Renton, WA on November 20, 1954 during which time he served in the US Army for two years and then made their home in Brodhead, WI. He worked for Beloit Corporation for 35 years and retired in 1998. Kenny was an active member of the community serving on the Brodhead Fire Department for over twenty years, Brodhead Lions Club, American Legion 197/Past Post Commander, and an active member of the Bethlehem Lutheran Church. Kenny was an avid golfer and a member of the Decatur Lake Golf Course. He enjoyed playing golf with the guys, traveling with Mary and friends, breakfast with the �Old Duffers� and his monthly investment club dinners. His true love was spending time with his wife, kids and grandchildren, which brought him the most joy. Kenny will be remembered for his beautiful smile, dry sense of humor, and for always being there for his family and friends. Funeral services will be held at Bethlehem Lutheran Church, Brodhead, WI, at 10:30 a.m. Wednesday, July 28th, 2010 with Pastor Kenneth Schaub officiating. Burial will be in Greenwood Cemetery, Brodhead, with full military rites. Visitation will be held Tuesday, July 27th, 2010 at D.L. Newcomer Funeral Home, Brodhead, WI from 5:00 p.m. to 8:00 p.m. A memorial fund will be established. The family would like to give a special thanks to Hospice Home Care, Green County, for their compassion and kindness. �Dad - thinking of you will always keep the love in our hearts and a smile on our faces.�

Brodhead - Kenneth Dean Severson, age 77, passed away at his home on July 25th, 2010 after a courageous battle with cancer. Ken was born on March 6, 1933 in Argyle, WI, the son of Alvin and Clara ( Evenstead) Severson. He is survived by his... View Obituary & Service Information

The family of Kenneth Dean Severson created this Life Tributes page to make it easy to share your memories.

Brodhead - Kenneth Dean Severson, age 77, passed away at his...

Send flowers to the Severson family.