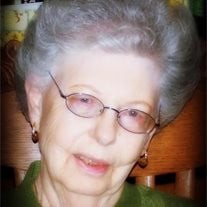 LaVera Alberta (Marie) Hall, 93, formerly of Brodhead, passed away on Saturday, January 16th, 2016, at the Evansville Manor, Evansville, WI. She was born on the Walford farm in Cross Plains, WI, the daughter of Arthur and Cora (Walford) Schindler. She married Frank E. Hall on July 29th, 1939 at St. Victor's Catholic Church, Monroe, WI and they were together for 61 years until his death in December of 2000. LaVera and her husband moved many times during their married life, living in Monroe, Milwaukee, Blanchardville, Albany and then Rockford, IL. While living in Milwaukee, she attended Vocational School and then went to work for A.O. Smith in the office. After moving to Rockford, IL, she went to work for Bergner's in the office and retired from there after 18 years. She and her husband then returned to Wisconsin after their retirements. LaVera's life revolved around her husband and family and she loved to reminisce....telling stories of the places she lived, worked and her life's events. She looked forward to family gatherings and a good card game with all the fun and laughter. She also enjoyed music and loved to dance, going to many shows and dances with her husband and family members. She is survived by a daughter, Lynette (Gary) Huffman; a son, Thomas (Diana) Hall, both of Brodhead; 7 grandchildren, 18 great-grandchildren and many great-great grandchildren. She was preceded in death by her parents, husband, daughter Janet Kimberly, brother Delbert Schindler and sister Arlyne Foltz. A private service will be held at 11 a.m. on Wednesday, January 20th, 2016, at the D.L. NEWCOMER FUNERAL HOME, BRODHEAD, WI, with Father Michael Moon presiding. Burial will be in Greenwood Cemetery, Brodhead, WI.

LaVera Alberta (Marie) Hall, 93, formerly of Brodhead, passed away on Saturday, January 16th, 2016, at the Evansville Manor, Evansville, WI. She was born on the Walford farm in Cross Plains, WI, the daughter of Arthur and Cora (Walford) Schindler.... View Obituary & Service Information

The family of LaVera Alberta (Marie) (Schindler) Hall created this Life Tributes page to make it easy to share your memories.