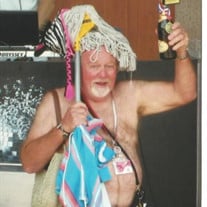 Obituary Larry (Red) Charles Clark left us surrounded by his loving family on December 14, 2019. This strong man wasn’t able to fight his lingering illness any longer. Larry was born on March 23, 1947 to Margaret (Goeke) and Charles Clark in Monroe, Wisc. Lived his entire life in the Davis, Durand area. He graduated from Durand High School – Class of 1965. His early years he worked for various construction companies and later became a teamster truck driver (known as Wilbur) retiring after 30 years with Teamster Local 325. Larry was a past Volunteer Fireman and Member of the 1st EMT for the Durand Fire Dept. through OSF, loved to do the water fights in various towns; past Member of the 1st  Winnebago County Water Rescue and Recovery Team ,past Treasurer of the Northern Illinois Firemen’s Association; past Member of St. Paul’s United Church of Christ where he served as board president and also numerous committees. His love for sports started with coaching slow pitch in the Durand/Davis area, then he became a very vocal and supportive Durand Bulldog fan for his 3 children (Chris, Craig and Kelli). It then continued even greater with his 5 grandchildren – McKenzie and Hailey – when he became a Stillman Valley Cardinal, and a Dakota Indian fan for Justin, Katie and Josh. He was able to attend State Football Championship games for all three of these schools and a track state meet. And then there was our blessed singer, Hailey, whose voice brought tears to his eyes many times. He would say – What a gift to have these grandkids!! He could proudly state he hardly missed any of these kids’ events and he loved every minute of it! Not only sports did he support , but their academic accomplishments and military as well. He was one Proud Grandpa! He was a fun-loving character. May all who knew him remember him for that with his laughter and smile. He loved the hayrides to which he would proudly drive his JD 70 (an avid fan of the green and yellow); pool parties, campouts, parades with his team of Haflingers, family trips, and the list goes on and on with many lasting memories. He will be missed by his high school sweetheart Debbie of 51 years – married on June 1, 1968 and his sons- Chris (Jessie)-Rock City, Craig – Orangeville and daughter -Kelli Horton-Davis. After these three blessings to their family, along came his grandkids – Dr. Justin (Sam) Clark of DesMoines, IA, Katie and Josh Clark of Rock City, McKenzie (Casey) Horton of Roscoe, Il and Hailey Horton of Davis and a great granddaughter Charlotte (Charlie) Clark of DesMoines, IA. Also known as Uncle Bub to nieces Dana (Kief), Joann, Julie (Ricardo), and Pam and Uncle to Brian and Shawn. And his many special cousins. Family was very important to Larry and was the focus of his life. He was most grateful to his doctor friends Kirsten Johanson and Kate Kinney of the Monroe Clinic/Hospital. And the wonderful caring Nurses and Cna’s from the ER department to all of them on Floor #1 east and west wings! They became his family through his illness and he loved them all.   Larry will join his mother and father and brother Terry. Cremation rites and private services were his wishes. His immediate family will gather for a celebration of his life.  The DL Newcomer Funeral Home in Brodhead assisted the family with their cremation needs.   Hailey's Tribute   Tex Ritter - Just Beyond the Moon       www.dlnewcomerfuneralhome.com   608-897-2484 To send flowers to the family or plant a tree in memory of Larry Charles Clark, please visit our floral store. You are using an outdated web browser that does not support this video. Your browser does not support this video format. You should be able to view it in Chrome, Safari or Internet Explorer. $(document).ready(function(){ if ( false === supports_h264_baseline_video() ) { $("#vdfmtnt").show(); $("#vidplyr1").hide(); } });  Recording of Service $(document).ready(function(){ initServiceAudio(); });

The family of Larry Charles Clark created this Life Tributes page to make it easy to share your memories.

Obituary
Larry (Red) Charles Clark left us surrounded by his...

Send flowers to the Clark family.