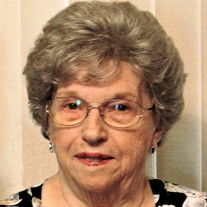 Obituary      Lois E. Friedly, age 85, of Brodhead, passed away unexpectedly on Wednesday, August 1, 2018, at Woods Crossing Nursing Home, Brodhead. She was born on October 7, 1932 in Monroe, WI, the daughter of Lee and Leah (Wolgast) Reasa. She married Fritz F. Friedly on August 3, 1951 at the United Methodist Church, Brodhead.      Lois graduated from Brodhead High School in 1951. She was a member of the United Methodist Church of Brodhead, had been a member of the Brodhead Chamber of Commerce, and the Royal Order of the Moose, Janesville. She owned and operated LeRae's Boutique in Brodhead for many years. Lois enjoyed conversing with people, dancing, cooking and sewing.      She is survived by her husband Fritz, of Brodhead; two daughters, Peggy (Don) Niedermeier, Brodhead, Linda Wahl, Footville, WI; grandsons, Daniel Wahl, Brad (Jill) Niedermeier, Bryan (Krystynn) Niedermeier; and a great-grandson, Blake Niedermeier. She was preceded in death by her parents, an aunt and uncle, Maurice and Lila Bernstein; in-laws, C.W. and Margaret (Schneider) Friedly.      Private family services will be held on Saturday, August 4, 2018, at the D.L. Newcomer Funeral Home, Brodhead, WI, with Rev. Krystal Goodger officiating. Burial will be in Greenwood Cemetery, Brodhead, WI. To send flowers to the family or plant a tree in memory of Lois Elaine (Reasa) Friedly, please visit our floral store.

The family of Lois Elaine (Reasa) Friedly created this Life Tributes page to make it easy to share your memories.