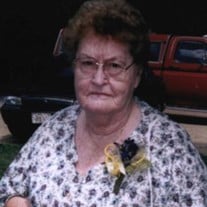 Lola L. Coggins, age 90, was called home by her Lord and Savior, Jesus Christ, on March 17, 2015. She was born on June 17, 1924 to Thomas and Mammie (Williams) Allen in Russellville, AL where she resided until she was united in marriage to her lifelong partner, Cleo A. Coggins on August 12, 1945. They shared 60 years together and had 9 children. Lola raised her children in Rockford, IL until moving to Wisconsin in 1976. Lola's passion in this life was her children and her family. Her door was always open for all to be welcomed and loved. She worked tirelessly raising her children and enjoyed her grandchildren like her own. Everyone fought to stay at Grandma's house, it was the best place to be! Lola loved to travel, near and far, most precious was their family vacations to Sweet Home Alabama. Her Southern roots always ran deep.. She is survived by 9 children; Jerry (Darlene) Coggins, Rickey Coggins, both of Beloit, Patsy (Martin Wooly) Robertson, Juda, WI, Jimmy Coggins, Janet Strothman, Vickey Coggins, all of Brodhead, Carol (Greg) Merrick, Independence, MO, Tony R. (Marie) Coggins, Janesville, Lisa (Dennis Kruswick) Coggins, Algoma, WI and Grandma/Mom to Misty (Randy) Yenney, Knoxville, IA; 24 grandchildren, 36 great-grandchildren, 9 great-great grandchildren, and lifelong friend, Polly Gorst, Rockford, IL. She was preceded in death by her parents, husband, brothers, J.C., Thomas, Billy and Roscoe; sisters, Christine, Lilla, Barbara and Lois; great-grandson, Austin Manley, and daughter-in-law, Brenda Coggins. Funeral services will be held at noon on Saturday, March 21, 2015, at the Living Word Church, Brodhead, WI. Burial will be in Greenwood Cemetery, Brodhead. Visitation will be held on Saturday from 10:30 a.m. until time of services at the church. The family would like to extend a very heartfelt thank you to mother's care providers at the Monroe Clinic, including Dr. Richardson, Jodi, Lori, Alexa, Constance and the entire Imaging Dept. Further thanks to the Monroe Clinic Homecare Hospice for their dedicated team during this difficult time.

Lola L. Coggins, age 90, was called home by her Lord and Savior, Jesus Christ, on March 17, 2015. She was born on June 17, 1924 to Thomas and Mammie (Williams) Allen in Russellville, AL where she resided until she was united in marriage to her... View Obituary & Service Information

The family of Lola L. (Allen) Coggins created this Life Tributes page to make it easy to share your memories.