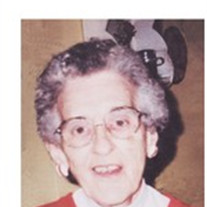 Loretta Harriet Cox, age 88, of Brodhead, went home to be with her Savior, Jesus Christ on Friday, July 29, 2011. She had been a lifelong resident of the Brodhead area and spent her final four years at Pleasant View Nursing Home in Monroe. She was born on November 23, 1922 in Avon Township, the daughter of Albert and Elizabeth (Rhyner) Stuessy. She married Arlie Carl Cox on April 14, 1945 in Beloit. He passed away on April 2, 1987. Loretta grew-up on the family farm with twelve siblings. She was an active member of the Avon Community Church for over 60 years, where she taught Sunday School and was secretary for almost 30 years. Loretta worked at Freeman Shoe in Beloit for many years and was an Avon lady for over 40 years. She was a very outgoing and friendly person who had many friends and she also loved flowers, and had the biggest garden in the area. Her cooking and baking talents were as good as it gets, especially during the holidays. Loretta and her husband were hard working and loving parents, who raised their family on the farm and in a Christian home. She is survived by her sons, Phillip (Pamela) Cox, New Glarus, Franklyn (Julia) Cox, Brodhead, grandsons, Joshua Cox, Madison, Shaun (Brittney) Cox, Waunakee, Richie and Joseph Cox, both of Brodhead, sisters, Della Greenberg, Dorothy Gessert, Letha (Arthur) Whipple, Rheta (James) Nipple, Lorna Mitchell, brothers-in-law, Aaron Norder and Howard Paulson, and several nieces and nephews. She was preceded in death by her parents, husband, sisters, Eleanor in infancy, Elmira Smith, Arlene Burgener, Alberta Norder, Jeanette Paulson, and two brothers, Delmar and Walter Stuessy. Funeral services will be held at 11:00 a.m., Tuesday, August 2, 2011, at the D.L. NEWCOMER FUNERAL HOME, BRODHEAD, WI, with Pastor Phil Ramsey officiating. Burial will be in Newark Cemetery. Visitation will be held from 9:30 a.m. until time of services at the funeral home. In lieu of flowers, a memorial fund in Loretta�s name will be established. The family would like to thank the Pleasant View Nursing Home of Monroe for mother�s excellent care. We will all miss her loving nature and warm smile.

Loretta Harriet Cox, age 88, of Brodhead, went home to be with her Savior, Jesus Christ on Friday, July 29, 2011. She had been a lifelong resident of the Brodhead area and spent her final four years at Pleasant View Nursing Home in Monroe. She... View Obituary & Service Information

The family of Loretta Harriet (Stuessy) Cox created this Life Tributes page to make it easy to share your memories.

Loretta Harriet Cox, age 88, of Brodhead, went home to be with...

Send flowers to the (Stuessy) family.