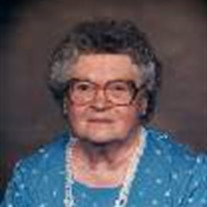 Brodhead - Mabel Clara Cramblett, of Brodhead, departed from this life at her home on Sunday, January 17, 2010 at the age of 100. She was born of a German immigrant, Paul John Wiatrok and Ida Stopper Wiatrok on December 29, 1909 in Baraboo, WI. She married Harrison Cramblett on January 30, 1928 in Dubuque, IA. Most of Mabel�s life was spent caring for her family. She took great pride in their accomplishments. There were tough times, especially through the depression. She worked hard to make a loving home, and �home� was filled with love. She was an avid gardener and seamstress, enjoyed dancing and entertaining her family and friends. She will be remembered as a good Mother, helping her children through their lives. Her words of �that�s life� will remain in their lives forever. She will be remembered by her children and grandchildren as the best storyteller and artist they had ever heard or seen. She remained high in spirit through the pains of aging, always cheerful, taking each day as it came and never finding fault with it or anyone. She enjoyed hearing about her family and friends, even though hearing became so difficult. She deserves her peace in God�s Love. Mabel is survived by daughters, Janice Schimmel, Philadelphia, PA, Jo (Russel) Pinnow, Darlene (Ronald) Schwartzlow, both of Brodhead, grandchildren, Randy (Katie) Pinnow, Rachel Pinnow, Ryan (Krista) Pinnow, Kelly (Rory) Trudell, Kristy(Michael) Beyer, a sister, Anna Roginski, nine great-grandchildren and many nieces and nephews. Loved ones that have preceded her in her journey were her husband, Harrison, son, James and his wife Patricia, son-in-law, John Schimmel, her parents, two brothers, Alfred Wiatrok and his wife Alma, George Wiatrok and his wife Kate, and a sister, Irene Kaether and husband Ewald. Funeral services will be held at 11:00 a.m., Saturday, January 23, 2010, at the D.L. NEWCOMER FUNERAL HOME, BRODHEAD, with Pastor Steve Groves officiating. Burial will be in Greenwood Cemetery, Brodhead. Visitation will be held from 9:30 a.m. until time of services at the funeral home.

Brodhead - Mabel Clara Cramblett, of Brodhead, departed from this life at her home on Sunday, January 17, 2010 at the age of 100. She was born of a German immigrant, Paul John Wiatrok and Ida Stopper Wiatrok on December 29, 1909 in Baraboo,... View Obituary & Service Information

The family of Mabel Clara (Wiatrok) Cramblett created this Life Tributes page to make it easy to share your memories.