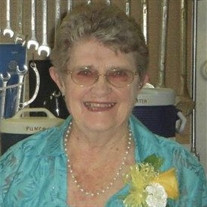 Marie E. Niedermeier, age 89, of Rock City, IL, passed away on Thursday, July 21, 2016, at her home. She was born on January 8, 1927 at her home near Evansville,WI, the daughter of Swiss immigrants, John and Elizabeth (Thomann) Ruef. She married... View Obituary & Service Information

The family of Marie Emma (Ruef) Niedermeier created this Life Tributes page to make it easy to share your memories.