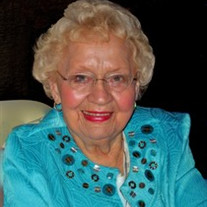 Mary Catherine Ten Eyck Milks, Brodhead, passed away on Thursday, July 24, 2014, after a wonderful life of 89 years. Mary was born to her proud parents, Frank and Margaret (Taylor) Ten Eyck on February 8, 1925, at the Taylor homestead, Spring Valley Township, Brodhead, Wisconsin. Mary began playing the piano when she was two years old. By the age of five, she pestered her two older brothers, Pete and Frank Jr. (Hank), by repeatedly asking: �What song do you want me to play next?� Often they requested she play �Over the Hill and Far Away.� Mary was able to play any song that she heard and that brought joy to many. She taught piano lessons for 48 years, and was thrilled that her last full time student was her relative, Drew Ten Eyck. Mary played at community events, the Brodhead United Methodist Church, of which she was a lifelong member, and other churches in the surrounding area. God was an important part of her life and she felt richly blessed. Mary was married to Merritt �Putt� Milks for 41 years before he passed away; she was broken-hearted they were not together longer. Mary and Putt raised a fun-loving family in Brodhead, a city they loved. Mary is survived by her four children; Peggy (Dave) Dallman, Jane Dorcey, Merritt (Carole) Milks, and Connie Sue (Tom) Prochnow; seven grandchildren, Lyndsey (Rick), Nick, John (Britton Gandy), Justin (Amanda), Joia (Greg), Chelsea and Chase (Brenna); and four great-grandchildren, Seryna, Lyric, Griffin and Freya. Mary loved it when family gatherings ended with her playing the piano, which lent itself to a good time of singing and dancing, and ample yahooing with frequent shouts of "Swing it, Mary!� Mary knew how to have fun, and she had lots of it! A Memorial Service will be held at 5 p.m., Thursday, August 14, 2014, at the United Methodist Church, Brodhead. Burial will be in Scotch Hill Cemetery, Spring Valley Township, Rock County, Wisconsin. Visitation will be held from 4 p.m. until 8 p.m., Wednesday, August 13, 2014 at the D.L. Newcomer Funeral Home, Brodhead, Wisconsin. In lieu of other expressions of sympathy, a memorial will be established in Mary�s name. �Brodhead has been especially good to me.� Mary Milks $(document).ready(function(){ var ifr = $("#06N80141825D10L0"); ifr.data("ratio", ifr.attr("height")/ifr.attr("width") ); ifr.removeAttr("width").removeAttr("height"); // Resize the iframes when the window is resized $(window).resize(function(){ var width = ifr.parent().width(); ifr.width(width).height(width * ifr.data("ratio")); }).resize(); });

The family of Mary Catherine (Ten Eyck) Milks created this Life Tributes page to make it easy to share your memories.