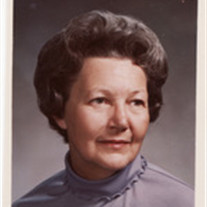 Mary Belle Lyons, age 96, passed away peacefully on August 14, 2010 at Oakwood Village West. Mary Belle was born on July 12, 1914, in Brodhead, WI, the daughter of Andrew and Lila (Zavitz) Lawton. She graduated from Brodhead High School in 1932 and from the University of Wisconsin in 1936 with a degree in education. She was a member of Gamma Phi Beta sorority and remained involved in sorority activities for many years. She met Robert W. Lyons at the UW and they were married on April 26, 1941. He preceded her in death in 1960. Prior to her marriage, she taught in the Lake Mills School District. She began working for UW Hospital in 1956. During her career she handled administrative functions when the Department of Pediatric Medicine was established and later served as supervisor of Outpatient Clerical Services. Following her retirement in 1976, Mary Belle served as a volunteer at the hospital for many years. As a single working mom, Mary Belle was a major source of inspiration and financial assistance for her three children while they attended the University of Wisconsin. She was an avid fan of the Badgers, Packers, and Brewers. She loved to travel, especially visiting her family in Florida every winter. She was an excellent card player who enjoyed her bridge groups and games of Casino at family gatherings. Nothing delighted her more than spending time with her grandchildren. Mary Belle was a strong, independent woman whose good humor and unflinchingly positive attitude about life will be dearly missed by all who knew her. Mary Belle is survived by her sons Robert (Peg) Lyons of Middleton and Michael Lyons of Deland, FL and daughter Patricia Lyons of Singer Island, FL; grandchildren Andrew (Lindsay) Lyons of Middleton and Elizabeth Lyons of San Francisco, CA; and great-grandchildren Carson and Spencer. She was preceded in death by her parents, her husband, an infant brother, and her sisters Ann Timm and Helen Stencel. A memorial service will be held on Friday, August 20 at 11:30 A..M. at Resurrection Chapel, Oakwood Village West, 6201 Mineral Point Road, followed by a reception for family and friends at Heritage Oaks, adjacent to the Chapel. Graveside services will be held at 3:30 p.m., Friday, August 20, 2010 at the Greenwood Cemetery in Brodhead. In lieu of flowers, memorials may be made to the UW Carbone Cancer Center, 600 Highland Avenue, Madison, WI 53792, or the UW American Family Children's Hospital, 1675 Highland Avenue, Madison, WI 53792. Specify Mary Belle Lyons Memorial. The family wishes to express their gratitude to the dedicated and caring staff at Oakwood Village for the comfort that they provided to Mary Belle in her final years.

The family of Mary Belle (Lawton) Lyons created this Life Tributes page to make it easy to share your memories.