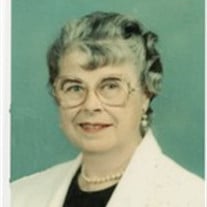 �MaryBelle Habeger, age 89, Evansville, went to be with her Lord and Savior, Christ Jesus. She was born on April 23, 1921 in Spring Grove Township, Green County, WI to Ralph and Alice (Douglas) Steele. A graduate of Brodhead High School and Groves-Barnhart Secretarial School, she worked as a private secretary at the United Telephone Co., Monroe, WI. After her marriage to Elias (Eli) Habeger in Brodhead on August 24, 1942, she was employed in the office of Atty. M.W. Meienburg, Brodhead. In 1946 she and Eli formed a business partnership, �The Juvenile Shop�, and operated the business for 38 years in Evansville and a branch store in Brodhead for 18 years. MaryBelle was an organizer and sponsored many children in style shows in both Evansville and Brodhead. They retired in 1984. In her mid-20�s MaryBelle trusted in Christ as her personal Savior. A student and teacher of the bible, she planted and watered the seed of God�s word throughout her life, having a rapport with youth and adults alike in teaching in churches and private homes. She weighed the biblical scholars with the Scriptures and formulated her own teaching materials. Her joy was leading a soul to the saving knowledge of Christ. In churches, she took on the responsibilities of Sunday School Superintendent, youth leaderships, teaching, and sang in choirs. An essayist, of family historian, and genealogist, MaryBelle authored two books �Wash on the Douglas Family Line�, and �Wash on the Steele Line�. She often said she wasn�t born with a silver spoon in her mouth, but with scissors in her hand, so she leaves her lending library of humorous scrapbooks; family history, and memorabilia scrapbooks; countless subject scrapbooks; and gave many as gifts. MaryBelle had a passion for studying house plans. In 1959, the Habegers purchased the site of the demolished Owen�s Mill and the Mill House was remodeled. In 1971, she drew-up plans for a large addition. She once remarked she had done everything except roofing! She was a gardener, and enjoyed raising her own flower seedlings and plants in her solarium; hospitable, the Harbager home was a mecca for Christian friends who enjoyed Hobo Parties, Progressive Dinner Parties, Potluck Dinners, and many innovative events MaryBelle planned, until Eli�s death and MaryBelle�s failing health. Many will miss her humorously illustrated Christmas letter. She provided for a myriad of songbirds and housecats. An independent lady, she was dependent upon her Lord. She is survived by the son she cherished, and the daughter he chose for her, Hollis and Susan Habeger, St. John, IN, sister-in-law, Lillian Habeger, West Union, IA, 14 nieces and nephews, 2 cousins, the LaVerne Siverling Family, Reedsburg, WI, who shared their children, Steve, Becky and Kim, as her grandchildren, and many friends. Her parents, husband Elias (1996), and a brother, Stanley Steele (1997) predeceased her. A celebration of her life will be held at the D.L. Newcomer Funeral Home, Brodhead, on Wednesday, January 26, 2011 at 12:00 p.m., with Rev. Paul Bawden officiating. Visitation will be from 11:00 a.m. until time of the service. Charles and Ruth Gildersleeve will have charge of special music. Burial will be in Greenwood Cemetery, Brodhead. She did not rest on shifting sand, nor feared the storms that raged, for calm and secure, she stood secure, Upon the Rock of Ages with a deep abiding faith. MaryBelle was a tither to missions, so the family will give Memorials to the two most needy - The Salvation Army and Rural Bible Crusade. MaryBelle�s family wishes to thank the staff of the Janesville Dialysis Center, on Woodman Street, for 12 years of concerned care for their mother.�

&#65533;MaryBelle Habeger, age 89, Evansville, went to be with her Lord and Savior, Christ Jesus. She was born on April 23, 1921 in Spring Grove Township, Green County, WI to Ralph and Alice (Douglas) Steele. A graduate of Brodhead High School... View Obituary & Service Information

The family of MaryBelle (Steele) Habeger created this Life Tributes page to make it easy to share your memories.

�MaryBelle Habeger, age 89, Evansville, went to be with her Lord...

Send flowers to the Habeger family.