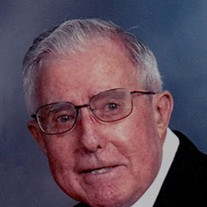 Melvin L. Updike, age 93, of Janesville, formerly of Monroe, passed away on Saturday, September 26, 2015, at his home. He was born on October 13, 1921 in Lynxville, WI (Crawford Co.), the son of Frank and Minnie (Smith) Updike. He married Hazel A. Duerst on August 11, 1942 in Monticello, WI. She passed away on January 29, 2006.Melvin and Hazel had farmed in Adams Township before moving to Monroe and then to Janesville in 1968. He retired from General Motors Corp., Janesville and was a member of the UAW. He was a member of Faith Lutheran Church and the Moose Club, both of Janesville. He enjoyed making Swiss Clocks, deer hunting, fishing, dancing, playing cards and visiting the casinos. He is survived by three daughters, Janice (Rick) Schneider, Brodhead, WI, Nancy Bliefernicht (Rodney Hoverson), DeForest, WI, Kristine Fulmer (Ken Sommerfeldt), Janesville, WI; a son, Richard (Mary) Updike, Rice Lake, WI; a sister, Shirley (Bob) Albright, Sun City, AZ; seven grandchildren; two step-grandchildren; fifteen great-grandchildren; and one great great-granddaughter. He is also survived by two very special friends, Nyall Knutson and Margaret Klein. He was preceded in death by his parents, wife, a daughter, Judy Updike in infancy; four sisters, Olive Potts, Velma Voelker, Viola Tiffany, Garnette Olson; four brothers, George Eugene, Orville, Loren, and twin brother, Milford Updike; granddaughter, Kaitlyn Mae Updike; great grandson, Ashtian Rufer; and a son-in-law, LeRoy Rufer. Funeral services will be held at 11 a.m., Thursday, October 1, 2015, at the D.L. NEWCOMER FUNERAL HOME, BRODHEAD, WI, with Pastor Krystal Goodger officiating. Burial will be in Highland Cemetery, Monticello, WI. Visitation will be held from 5 p.m. until 7 p.m., Wednesday, at the funeral home. In lieu of flowers, the family suggests memorials be made to Mercy Home Hospice Care. The family would like to extend a very special thank you to the Hospice staff of Mercy Home Hospice Care, Chaplain Jim Wehrheimand, and Chuck, who had been with him most of this year, especially Crystal and Lisa. The family members would also like to recognize and give a big thank you to Melvin's daughter, Kristine Fulmer and grandson, Mike Rufer, for all the loving care they gave to him during this time which allowed his wishes to be able to stay at home. He was a wonderful, vibrant, witty, generous, caring man who never lost his razor sharp mind, and will be deeply missed by his family and friends.

Melvin L. Updike, age 93, of Janesville, formerly of Monroe, passed away on Saturday, September 26, 2015, at his home. He was born on October 13, 1921 in Lynxville, WI (Crawford Co.), the son of Frank and Minnie (Smith) Updike. He married Hazel... View Obituary & Service Information

The family of Melvin L. Updike created this Life Tributes page to make it easy to share your memories.

Send flowers to the Updike family.