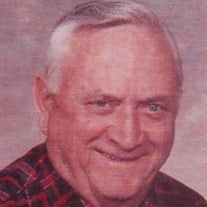 Merrill M. Woodward, age 90, of Verona, formerly of Fitchburg, WI, passed away peacefully on Monday, June 15, 2015, at Four Winds Manor, Verona, WI. He was born on September 23, 1924 in Brodhead, WI, the son of Manley and Clara (Johnson) Woodward. He married Helen D. Marty on September 27, 1947. She passed away on April 4, 2015. Merrill farmed with his wife for 10+ years in Evansville and then over 20 years in Fitchburg. He was a World War II Army Veteran, having served in the Pacific Ocean theater. Merrill enjoyed watching the Brewers and the Packers, was an avid bowler and photographer, and especially enjoyed fishing, hunting and being with his family. He is survived by two daughters, Linda (William) Roark, Silverdale, WA, Gail Woodward, Madison, WI; a son, Wesley (Lisa) Woodward, Minnesota City, MN; 6 grandchildren and 3 great-grandchildren. He was preceded in death by his parents, wife, and two sisters, Helen Deppeler and Ruth Buehl. Funeral services will be held at 2 p.m., Friday, June 19, 2015, at the D.L NEWCOMER FUNERAL HOME, BRODHEAD, WI, with Wesley Woodward M Div. officiating. Burial will be in Greenwood Cemetery, Brodhead, with military rites. Visitation will be held from 1 p.m. Friday until time of services at the funeral home. A special �Thank You� to Four Winds Manor and their staff for their love, care and attention.

The family of Merrill Manley Woodward created this Life Tributes page to make it easy to share your memories.

Send flowers to the Woodward family.