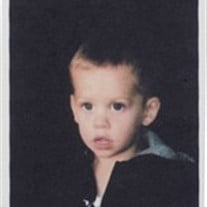 Brodhead - Michael Ryan Byers, age 3, of Newark Township, Rock County, WI, died as the result of an accident on Thursday, April 7, 2011. He was born on March 7, 2008, the son of Marvin D. and Jessica (Martin) Byers. Michael is survived by his... View Obituary & Service Information

The family of Michael Ryan Byers created this Life Tributes page to make it easy to share your memories.

Send flowers to the Byers family.