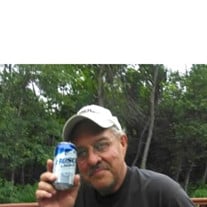 Michael G. Martin, age 68, of Brodhead, passed away on Monday, February 27, 2017, at the U.W. Hospital, Madison, WI. He was born on November 30, 1948 in Hustisford, WI, the son of John �Jack� and Joyce (Darville) Martin. He married Bonnie M. Kethcart on October 11, 1969 in Brodhead. Mike graduated from Brodhead High School in 1967. His life work was with GTE and Verizon Telephone companies, retiring in 2001. He was an avid outdoorsman, especially enjoying campfires, fishing, bow and gun hunting. Mike especially loved being with family and friends. He is survived by his wife, Bonnie, of Brodhead; a son, Aaron Michael Martin; a daughter, Michelle (Chris) McLain, both of Brodhead; three grandchildren, Karlee Ann and Fischer Michael McLain, and Charlie Michaelee Martin. He was preceded in death by his parents and a brother Jack. A gathering of friends and family will be held for Mike on Thursday, March 2, 2017, from 4 p.m. until 7 p.m. at the D.L. Newcomer Funeral Home, Brodhead, WI. There will not be a formal service. A scholarship at the Brodhead High School will be established in Mike's name.

The family of Michael George Martin created this Life Tributes page to make it easy to share your memories.

Send flowers to the Martin family.