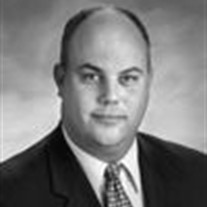 Michael Mead Watson, age 40, of Albany, WI, passed away on Tuesday, April 20, 2010, at his home. He was born on July 17, 1969 in Beloit, WI, the son of Patrick and Susan (Richey) Watson. He married Kimberly A. Piper on May 19, 2001 in Albany. Michael grew-up in Stoughton, WI, and graduated from Stoughton High School in 1987, where he was very active in sports. Mike was passionate about helping people in his role as a financial advisor with Thrivent Financial and was a teacher, mentor, and a friend to many. Prior to joining Thrivent, Mike was employed with the Gordie Boucher Group in both Janesville and Madison. He enjoyed sports, including golf, pool, deep sea fishing, hunting, and cross-country trips on his motorcycle. He was an avid animal lover. Mike will be missed by all who were fortunate to have known him. He is survived by his wife, Kimberly, Albany, parents, Patrick and Susan Watson, Sun Prairie, WI, sons, Gregory M., Lackland Air Force Base, San Antonio, TX, Gabriel P., Sun Prairie, WI, Jesse A. Partridge, Albany, WI, a daughter, Mercadiez M. Piper and her friend Mark, Beaver Dam, WI, a sister, Angela (John)Ireland, Raleigh, NC, and a brother, Joseph (Nicole) Watson, Platteville, WI. Memorial services will be held at 4:00 p.m., Monday, April 26, 2010, at the D.L. NEWCOMER FUNERAL HOME, BRODHEAD, WI, with Rev. Larry Froemming officiating. Burial will be in Avon Community Cemetery. Visitation will be held from 2:00 p.m. until time of service at the funeral home. Donations may be made in Mike�s name to a humane society of your choice.�

The family of Michael Watson created this Life Tributes page to make it easy to share your memories.

Send flowers to the Watson family.