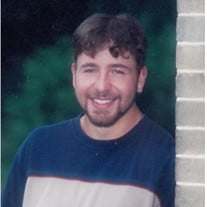 Michael Duane Wolfe, age 33, of Brodhead, WI, passed away unexpectedly on Monday, November 6, 2017, in Cleveland, OH. He was born on January 17, 1984 in Beloit, WI, the son of Larry D. and SuzAnn (Hayden) Wolfe. Michael graduated from Brodhead High School in 2002. He was a self-employed woodworker and had worked for R & S Marketing of Madison, WI, and United Industries of Beloit, WI. He is survived by his parents, Larry and SuzAnn, Brodhead; fiance, Angelica �Angie� Cedeno, Cleveland, OH; two sisters, Kellie Brickson and Tracy Womack, both of Beloit; nieces, Ashley, Kristin, Tianna; and nephews, T.J., Mark, and Jayden. He was preceded in death by his maternal and paternal grandparents, maternal great-grandmother, Eunice Crotteau, and his beloved dog Bear. Funeral services will be held at 11:30 a.m., Friday, November 10, 2017, at the D.L. Newcomer Funeral Home, Brodhead, WI, with Pastor Krystal Goodger officiating. Burial will be in Greenwood Cemetery, Brodhead, WI. Visitation will be held from 10 a.m., Friday, until time of services at the funeral home.�

The family of Michael Duane Wolfe created this Life Tributes page to make it easy to share your memories.

Send flowers to the Wolfe family.