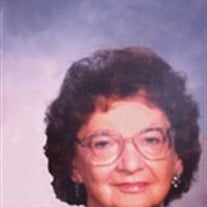 Brodhead - Mildred June Aue, age 83, formerly of Brodhead, passed away on Friday, January 27, 2012, at Canon City, CO. She was born on July 11, 1928 in Rockford, IL, the daughter of George and Mildred (Strouse) Swanson. She married John Earl Aue Jr. on January 4, 1948 in Loves Park, IL. John passed away on July 2, 1996. Mildred attended East High School in Rockford, IL. She was a member of Bethany Lutheran Church, Brodhead, and enjoyed baking and gardening. Mildred worked as a CNA, her favorite job, caring for others; and retired from Woodbridge of Brodhead. She resided in Brodhead, WI until the winter of 2007 when she moved to Colorado to reside with her daughter, Diane. She is survived by her children, Diane (Randall) Swagger, Canon City, CO, John (Jane) Aue, Richland Center, WI, Karen (Dean) Nygaard, Snohomish, WA, Jeffrey Aue, Dodgeville, WI; ten grandchildren and nineteen great-grandchildren. She was preceded in death by her parents, husband, two brothers, Kenneth and Gordon Swanson, and her youngest son Greg. Funeral services will be held at 1 p.m., Saturday, February 4, 2012, at the D.L. NEWCOMER FUNERAL HOME, BRODHEAD. Burial will be in West Luther Valley Cemetery, rural Brodhead. Visitation will be held on Friday, February 3, 2012, from 5 p.m. until 7 p.m. at the funeral home.�

The family of Mildred J. (Swanson) Aue created this Life Tributes page to make it easy to share your memories.

Send flowers to the (Swanson) family.