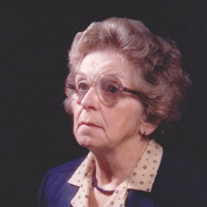 Obituary      Mona “Pauline” Hulburt, age 97, passed away on Sunday, January 21, 2018 at the Monroe Clinic Hospital, Monroe, WI.  She was born on May 25, 1920 in Decatur Township, near Albany,  the daughter of  Bert and Zula (Gillette) Pryce.  She married Harold Hulburt on April 5, 1937.  He passed away in 1977.      Pauline resided in the same home in Brodhead for 64 years until the age of 96.  She was a stay at home mom and in later years was employed 13 years at APCO of Brodhead, retiring in 1976.  Pauline was a member of the United Methodist Church and United Methodist Women’s Organization.  She contributed in leadership roles, committees and especially enjoyed participating in the church bazaar.   She was an avid seamstress which allowed her to utilize her creative abilities.  Pauline enjoyed sewing numerous baby quilts for family and friends. Her grandchildren were precious to her.       Pauline is survived by her son, Phillip (Anita) Hulburt of Osage Iowa; two daughters, Judith (Glen) Curless of Janesville WI,  Janis Lindsey of Middleton WI; six grandchildren Matthew, Stefanie, Andrew, Ryan, Adam, Ben; and seven great grandchildren, Mitchell, Nicole, Anthony, Logan, Jaden, Truman and Evelyn.  She was preceded in death by her husband and her six siblings.       Funeral services will be held at 11 a.m., Thursday, January 25, 2018, at the United Methodist Church, Brodhead, WI, with Rev. Krystal Goodger officiating.  A luncheon will follow the service.  Burial will be in Hillcrest Cemetery, Albany, WI.  Visitation will be held from 10 a.m. until time of services at the church. Pauline’s wishes are for memorials be for the United Methodist Church of Brodhead WI.   To send flowers to the family or plant a tree in memory of Mona "Pauline" (Pryce) Hulburt, please visit our floral store.

The family of Mona "Pauline" (Pryce) Hulburt created this Life Tributes page to make it easy to share your memories.