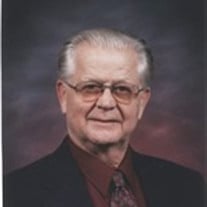 Monte Blu McClaren, age 74, of Brodhead, passed away on Christmas Day, December 25, 2010, at his home, after a courageous battle with cancer. He was born in Beloit, WI on July 14, 1936 to Earl and Ethel (Upward) McClaren. He was united in marriage to Jean Gadow of Brodhead, on October 8, 1960 at St. Paul Lutheran Church, Beloit. They celebrated their 50th Wedding Anniversary this year. He graduated from Beloit Memorial High School in 1955 and served in the U.S. Marine Corp from 1955 - 1959. He was very proud of his service record. Monte was the owner-operator of McClaren Machine and Tool, first in Beloit, then building in Brodhead in 1978. He was a member of the United Methodist Church in Brodhead. After his retirement on January 21, 1998, he and Jean operated McClaren�s Tree Farm, which he enjoyed so much. He loved fishing, hunting, bowling, playing cards and dominoes. Being with family and friends was most important. He is survived by his wife Jean, Brodhead, parents, Earl and Ethel McClaren, Beloit, three children, Thomas (Lisa) McClaren, Tammy (Flint) McElmurry, and Terri (Mark) McClaren, all of Brodhead, eight grandchildren; Jason Clark, Monroe, Eric Spanton, New Glarus, Alexander Clark, Angel McClaren, Sara Abb, Joseph Clark, Shane Abb and Alyson Abb, all of Brodhead, three great-grandsons, Jayce, Jayden and Tristan Clark, three special young people, Kaylee, Ashlen and Kyle Fischer, a sister, Shirley (Gerald) Murray, Beloit, a brother, Rodney (Hazel) McClaren, Slinger, WI, an aunt, Vivian Fillbach, Beloit, several nieces, nephews, cousins, and many friends. He was preceded in death by his grandparents, great-granddaughter, Katie Jo Clark, and a nephew, Monte McClaren. Funeral services will be held at 11:00 a.m., Wednesday, December 29, 2010 at the United Methodist Church, Brodhead, with Pastor Steve Groves officiating. Burial will be in Greenwood Cemetery with full military rites. Visitation will be held from 4:00 p.m. until 7:00 p.m., Tuesday, December 28, 2010, at the D.L. NEWCOMER FUNERAL HOME, BRODHEAD. A memorial fund will be established for Monroe Clinic Hospice and The United Methodist Church, Brodhead. Everyone who knew Monte will miss him and he will live on forever.

Monte Blu McClaren, age 74, of Brodhead, passed away on Christmas Day, December 25, 2010, at his home, after a courageous battle with cancer. He was born in Beloit, WI on July 14, 1936 to Earl and Ethel (Upward) McClaren. He was united in marriage... View Obituary & Service Information

The family of Monte Blu McClaren created this Life Tributes page to make it easy to share your memories.

Monte Blu McClaren, age 74, of Brodhead, passed away on Christmas...

Send flowers to the McClaren family.