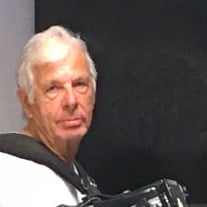 Obituary      Nicholas M. Quint, age 76, of Janesville, passed away unexpectedly on Friday, April 20, 2018, in Benton, IL.  He was born in Monroe, WI on June 1, 1941, the son of Nicholas M. and Elizabeth (Galauner) Quint.  He married Jeane Briggs-Bump on October 24, 1986, in Janesville.      Nick was a master aircraft mechanic, receiving many citations during the course of his career.  He started working as an aircraft mechanic for Roy True of True Aviation at the Rock County Airport and completing his career as the VP of Blackhawk Aircraft Maintenance, Inc., with his son Joe as the President and wife Jeane as the Secretary/Treasurer.  Nick was a member of the Elks Club and order of the Moose in Janesville.  He was an accomplished accordionist, and enjoyed playing and entertaining.  He especially loved restoring old planes.        He is survived by his wife Jeane, Janesville; his children, Debbie Stowers, Janesville, Michael (Lilian) Quint, Grays Lake, IL, Joseph (Kim) Quint, Janesville, Tammy (Craig) Endres, Lodi, WI, Shelby (Mark) Powers, Merrill,WI, Dwight (Joanne ) Bump III, Orfordville, William (Danae) Bump, Brodhead; two sisters, Betty Jordan, Janesville, Barbara Crossland, Santa Maria, CA; fourteen grandchildren and five great-grandchildren.  He was preceded in death by his parents and a brother Joseph.      A Mass of Christian Burial will be held at 11 a.m.  on Friday, May 4th, 2018, at St. William Catholic Church, Janesville, WI, with Father Brian Dulli presiding.  Burial will be in Hillcrest Cemetery, Albany, WI.  Visitation will be held on Friday from 10 a.m. until time of service at the church.   **Please visit this address for more about Nick and all the great accomplishments in aviation. beech18specialists.com/about.html   (Copy and paste in address bar.)   To send flowers to the family or plant a tree in memory of Nicholas "Nick" M. Quint, please visit our floral store.

The family of Nicholas "Nick" M. Quint created this Life Tributes page to make it easy to share your memories.