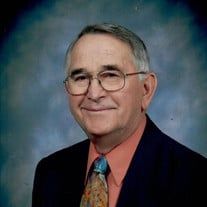 Obituary Paul Louis Haraldson 1925-2020 Brodhead - Paul Louis Haraldson was born February 1, 1925 to Hanna Mae Anderson Haraldson, and Harold William Haraldson, just a few minutes after his twin sister Pauline was born, surprising the family as they did not know they were having twins. Born on the kitchen table and kept warm in the stove during that cold February winter Paul never lived more than 8 miles from that very kitchen. Paul and Pauline were the youngest in the family, joining two older brothers, Curtis, Glenn and sister Berlis. Paul, known to his friends as “Louie,” attended a one-room country school for eight years in Rock County WI, before going to high school at Brodhead High School, eight miles away, in Green County WI.  He was in theater, band and captained the football and basketball teams. He graduated at age 16 from high school in 1942. The children lost their mother when Paul and his twin were young and they were raised by his father, grandmother, housekeepers (Mrs. Sims) and Aunts Nellie and Ella. He worked hard on the farm but in winter enjoyed playing hockey on a community hockey team. He enjoyed time with his friends and was known for his sense of humor. He sang in a Barber Shop Quartet that travelled throughout Green and Rock counties to various establishments singing for supper and drinks. Over the years he stayed competitive in basketball and especially hockey besting many of the younger guys in the neighborhood. He continued skating well into his 70s.    Older brothers Glen and Curtis went into the military during WWII and Paul was needed to stay home and farm. He joined the Army and served from 1950-1952 during the Korean War and served in Germany. He was well respected, becoming a Staff Sergeant and the coach for the unit’s football team. He lost hearing in one ear during artillery drills. Home from the war, he attended Agriculture classes and continued to farm. He went on a double date and although he was meant to be with the other young lady, somehow he ended up with the new school teacher, a pretty redhead named Carole Quamme. Several months later in the Lutheran church in Brodhead, Feb. 19th 1955 during a winter storm, they became husband and wife. They were married for 65 years and Carole took loving care of him in their home during his last years of life. Paul and Carole had 3 children, Eric, Paula and Joel who all had the adventure and advantage of growing up on a farm. Lots of fun was to be had on the farm including winter tobogganing and snowmobiling. Like most farmers Paul was a jack of all trades and a patient teacher, teaching woodworking and other skills to kids in 4-H. In retirement he was known to use his noon hour to help the kids on the elementary playground to get their ice skates on and teach them how to skate.    Paul was a well loved and a respected member of Brodhead and local farming community. He was a member of the Decatur Lake Country Club for 60 years, starting in 1947, and served as its President in 1958. He was a long-time member of Bethlehem Lutheran Church where he held many offices. He was selected to serve on the Green County Bank Board of Directors from 1973-1998. He was on the Spring Grove Insurance Board of Directors. He served on the Rock County ASCS.  For 30 years Paul was a member of the Lyons Club and served as its President in 1986. In 2003 he was awarded the Lions Club International Melvin Jones Fellow Award for outstanding service. Paul thoroughly loved his grandchildren and great grandchildren, Britta, Tenley, Gretchen, Jay, Hannah, Jack and Ivar. Paul was a generous and compassionate husband, father, friend, grandfather, father-in-law and great grandfather. He loved a good joke and kept his “dry sense of humor” up all his life. He was always most interested in hearing what any of his grandkids or family were doing, how many fish they caught, were they dating, how was the new job or the new house. Hearing a good report made him happy. He is survived by his loving wife of 65 years Carole, children Eric, Paula Haraldson and husband Paul Schersten, Joel and Sharon Haraldson and 5 grandchildren and one great-grandchild. He is preceded in death by his twin Pauline, siblings. Glen, Berlis and Curtis and grandson Jay and daughter-in-law Deanna. In lieu of flowers memorials can be directed to the family in his memory. A visitation will be held at the DL Newcomer Funeral Home, 1105 E. 9th Ave. in Brodhead on Monday, June 8, 2020 from 4:00 PM to 7:00 PM.  The family asks that all visitors wear a mask into the funeral home and visitors will be staggered as they enter the building to observe occupancy rules so we thank you for your patience if you have to wait to see the family.  Social distancing will also be observed while inside and a separate door will be used to exit rather than the main entrance.  A visitation will also take place at the funeral home on Tuesday, June 9, 2020 from 10:00 AM to 11:00 AM and then we will proceed to Rock Run Cemetery, 12856 Best Road in  Durand for graveside services at 11:30 AM.         www.dlnewcomerfuneralhome.com   608-897-2484 To send flowers to the family or plant a tree in memory of Paul Louis Haraldson, please visit our floral store.

The family of Paul Louis Haraldson created this Life Tributes page to make it easy to share your memories.

Send flowers to the Haraldson family.