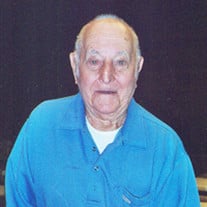 Brodhead - Paul D. Stefanik, age 97, of Brodhead, passed away on Wednesday, June 19, 2013, at Wood�s Crossing Nursing Home, Brodhead. He was born on September 17, 1915 in Stevens Point, WI, the son of John and Susie (Ofukany) Stefanik. He married Marvella Radtke on May 3, 1941 in West Allis, WI. Paul had farmed in Waterford, Albany, and Brodhead, moving to Spring Hill, Florida in 1980, where he spent 20 years before moving back to Brodhead. Paul had also worked for Knight Manufacturing Co., Brodhead. He was a member of St. Peter�s Lutheran Church, Brodhead, Green County Farm Bureau, NFO, and a former Albany School Board member. He enjoyed fishing, gardening and singing. He is survived by his wife, Marvella, Brodhead; two daughters, Judy (Gary) Studer, Monroe, Peggy (Lorin) Jordan, Juda; two sons, Larry (Kathy) Stefanik and Neil (Jackie) Stefanik, both of Albany; a brother-in-law, Ronald (Joan) Radtke, Brookfield, WI; nine grandchildren and twelve great-grandchildren. He was preceded in death by his parents, a sister, Julia Berger, and a brother, John. Funeral services will be held at 11 a.m., Monday, June 24, 2013, at St. Peter�s Lutheran Church, Brodhead, with Pastor Mark Neumann officiating. Burial will be in Greenwood Cemetery, Brodhead. Visitation will be held from 9:30 a.m. until time of services on Monday at the church. A memorial fund will be established.

The family of Paul Darell Stefanik created this Life Tributes page to make it easy to share your memories.

Send flowers to the Stefanik family.