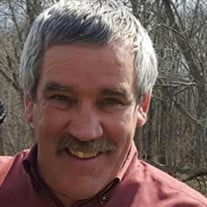 Brodhead/Lancaster, WI – Randy Joseph Abing, age 66 of Brodhead passed away surrounded by his family on March 29, 2022. He was born on September 19, 1955 to Cyril and Florentine (Wallenhurst) Abing. Randy graduated from Lancaster High School in 1973 and in 1975 graduated from Southwest vocational school in Ag Mechanics. In 1987 he pursued a new career and graduated as a line technician from Moraine Park Technical School in Beaver Dam. Randy married Jane Carl on October 4, 1975 in Platteville. Randy and Jane farmed in Lancaster from 1974-1980. He worked for Larry’s Welding from 1979-1988 and then worked as a line technician and eventually a foreman for Alliant Energy until his retirement in 2010. Randy was a volunteer wrestling coach in Brodhead for 26 years and enjoyed donating blood to the Red Cross over 20 times which resulted in over 25 gallons in total blood given. He enjoyed giving hayrides, four wheeler rides, mushroom hunting, taking care of his cats, watching the Andy Griffith show, watching the Packers, spending time at libraries and driving around town with his wife and visiting with people. Randy was also patriotic as people would recognize him driving around his car with his US and Packers Flags displayed. But most of all, Randy enjoyed spending time with his family, especially his grandchildren, watching and attending all of their school sports/activities. Randy is survived by his ever so patient and loving wife, Jane Ann; two children, Shane (Terri) Abing and Brandi (Buddy) Malcook; grandchildren, Brooke (Quinn) Malcook, Cody Malcook, Alexis Abing and Hayden Abing; his siblings, Mary Kay Abing (Jim Breuer), Peggy Sturmer, Charles “Chuck” (Kim) Abing, Keith (Lisa) Abing, Kevin (Deb) Abing, Ellen (Randy “Zippy”) Koeller, Marty (Jenn) Abing, and Kurt Abing; sister-in-laws, Terri Abing, Lois (Alan) Morrison, Rita (Kelvin) Luna and Alleine Carl; a god daughter, Kaley (Knapper) Johnson, special friends Mitchel and Megan Wiesenberg and several aunts, uncles, cousins, nieces, nephews and other relatives and friends. Randy was preceded in death by his parents, Cyril and Florentine Abing; a brother, Ronnie Abing, 2 brothers in law, Dave Sturmer and Danny Carl; his mother and father in law, Lawrence and Frances Carl and his step father, Danny Joyce. In lieu of flowers arrangements, memorials may be directed to the Brodhead Public Library, Orfordville Public Library or the Lancaster Wrestling Team. A Celebration of Life will be held at the Bridges Bar and Grill, 1034 First Center Avenue in Brodhead on Saturday, April 2, 2022 from 2:00 PM to 6:00 PM. Another Celebration of Life will be held in Lancaster, WI at Zippy’s Brass Rail, 120 East Maple Street on Saturday, April 9, 2022 from 1:00 PM to 4:00 PM. The DL Newcomer Funeral Home in Brodhead is assisting the family. www.dlnewcomerfuneralhome.com 608-897-2484

Brodhead/Lancaster, WI &#8211; Randy Joseph Abing, age 66 of Brodhead passed away surrounded by his family on March 29, 2022. He was born on September 19, 1955 to Cyril and Florentine (Wallenhurst) Abing. Randy graduated from Lancaster High... View Obituary & Service Information

The family of Randy Joseph Abing created this Life Tributes page to make it easy to share your memories.

Send flowers to the Abing family.