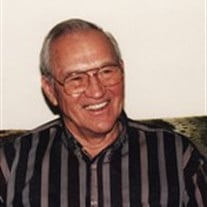 Richard G. Fischer, age 88, of Brodhead, WI, passed away on Monday, December 13, 2010, at Woods Crossing Nursing Home, Brodhead, WI. He was born on November 25, 1922 in Freeport, IL, the son of Melvin and Clara (Voss) Fischer. He married Arlene A. Johnson on October 11, 1946 at the Jefferson Prairie Church. She passed away on July 21, 2005. Rick was a dedicated farmer, having farmed in Seward, IL, and Avon Township, Rock County, WI, and stayed on the farm until moving to Beloit in 1997. He graduated from Winnebago High School, was a member of Bethany Lutheran Church, Brodhead, past Brodhead School Board member, loved water skiing, and belonged to multiple card clubs. Rick is survived by a son, Ron (Debbie) Fischer, Oregon, WI, a daughter, Pat (Kent) Parks, Ft. Atkinson, WI, a son-in-law, Tom Phillips, Hustisford, WI, a brother, Dave (Arlene) Fischer, Pecatonica, IL, eight grandchildren and nine great-grandchildren. He was preceded in death by his wife, a daughter Jan in 2003, and a sister, Shirley Fischer. Funeral services will be held at 11:30 a.m., Thursday, December 16, 2010, at Bethany Lutheran Church, rural Brodhead. Burial will be in West Luther Valley Cemetery. Visitation will be from 10:00 a.m. until time of services at the church. Memorials can be made to Bethany Lutheran Church or Woods Crossing Nursing Home, both of Brodhead.

The family of Richard G. Fischer created this Life Tributes page to make it easy to share your memories.

Send flowers to the Fischer family.