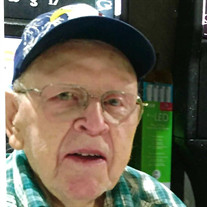 Robert Manley Becker passed away peacefully at his home on Tuesday, April 5, 2022. Bob was born April 20, 1928 and raised in Spring Grove township the son of Otto and Fern (Douglas) Becker. He attended Oakley School and graduated from Brodhead High School in 1946. Later that year he enlisted in the Army Air Corp Occupational Services and served in Japan from 1946 to 1949. He married Mildred Grenzow on January 9,1954 and they had three children, LuAnn, Susan and Richard. Bob had farmed in Spring Grove township for several years, then had many other jobs including working at Knight Manufacturing (Kuhn North America) from 1973 until his retirement 20 years later. After his retirement he operated Bob's Small Engine Repair. Bob had many interests and hobbies which included vintage airplanes, and as his family grew a strong interest in genealogy. During the winter months you could often find a jigsaw puzzle or two being worked on. They had also taken many bus tours around the country to national parks and especially enjoyed a trip to Hawaii. He also enjoyed the coffee get-togethers around the "Table-of-Knowledge" with many of his friends at the Country Gardens Cafe. On May 17, 2017 Robert was honored to be part of the VetRoll trip to Washington D.C. Robert is preceded in death by his parents, Otto and Fern Becker, his sister Helen Eyler, his brother Rodney Becker and his son Richard Becker. He is survived by his wife of 68 years Mildred, a sister Sarah Busjahn, a brother Russell Becker. Daughters LuAnn (Daniel) Gruber and Susan (Jon) Condon. Grandchildren: Dan (Melissa) Gruber, Neal Gruber, Randy (Lauren) Gruber, Kristina Barbknecht, Doug (Elsa) Condon, Bryan (Rachel) Condon. Great-granddaughters Morgan, Sydney, and Eliza Gruber, Lexi Barbknecht and Nora Condon plus many nieces and nephews. In lieu of flowers, memorials can be directed to the family in his memory. Please directed those to the DL Newcomer Funeral Home, PO Box 26, Brodhead WI 53520. A private family gathering will be held at a later date. The DL Newcomer Funeral Home is assisting the family. www.dlnewcomerfuneralhome.com 608-897-2484

Robert Manley Becker passed away peacefully at his home on Tuesday, April 5, 2022. Bob was born April 20, 1928 and raised in Spring Grove township the son of Otto and Fern (Douglas) Becker. He attended Oakley School and graduated from Brodhead... View Obituary & Service Information

The family of Robert Manley Becker created this Life Tributes page to make it easy to share your memories.

Robert Manley Becker passed away peacefully at his home on Tuesday,...

Send flowers to the Becker family.