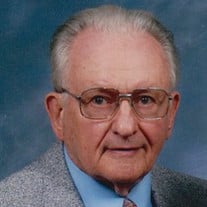 Robert Franklin Keen, age 93, of Brodhead, passed away on Wednesday, December 9, 2015 at Wood�s Crossing in Brodhead. He was born on Dec. 1, 1922, in Juda, Wisconsin, the son of Arthur and Edith (Asmus) Keen. He married Phyllis J. Guleson on June 26, 1949 at Bethlehem Lutheran Church, Brodhead. She passed away August 22, 2011. Bob graduated as Salutatorian of Juda High School in 1940. He then attended the University of Wisconsin. After his junior year he taught Agriculture, Chemistry, Physics, Mens Glee Club and coached basketball, baseball and volleyball at Juda High School from 1943-47. He finished his degree at UW Madison and graduated with honors in 1948. He then taught at Wilmot High School for a semester before accepting a job at Brodhead where he organized and developed the Vo-Ag Department and the FFA Chapter at Brodhead High School. It was one of the top chapters in Wisconsin. He taught in Brodhead from 1948-1979. In 1979 he returned to Juda to finish out his teaching career of more than 40 years. He received numerous awards, including the Honorary State Farmer Degree, Honorary American Farmer Degree. He was well known for his picture taking ability and his excellent slide presentations at the annual banquets. He always had a photo of a �man outstanding in his field�. He was a charter member of the Brodhead Jaycee�s and the Lions Club, a member of Bethlehem Lutheran Church, serving on the church council, and was President of the congregation when the new church was built. He was also a long time choir member. Bob served on the Green County Board for many years and was active in the �Hidden Valleys� and Tri-State Tourism organizations. He was a board member of SCLS (South Central Library System) for many years and received their Cornerstone Award in 2010 for exceptional service and dedication. Bob enjoyed following his kids and grand-kids sports for many years. He enjoyed his daughter Heidi's annual musicals at Johnson Creek and watching her sons play football at UW-Whitewater as well as his son Kevin's Monroe Girls Basketball teams. He was also a lifelong Wisconsin Badger Fan. He is survived by a daughter , Heidi (George) Nimm, Johnson Creek, WI; two sons, Kevin (Colleen) Keen, Monroe, WI, Kerry (Nina Ebbighausen) Keen, Minneapolis, MN; ten grandchildren, Scott (Mary) Nimm, Johnson Creek, Sean (Carri) Nimm, Stevens Point, WI, Steven (Brenda) Nimm, Happy Valley , OR, Chad Nimm, Fort Atkinson, Holly (Peter) Best, Mt. Horeb, WI, Heather (Mark) Andrews, Monroe, WI, Heidi (Andrew) Knapp, McFarland, Eric (Carline) Keen, Baltimore, MD, Laurel (Mark Buenaflor) Keen, and Collin (Erin Gundersen, fianc�e) Keen, Chicago, IL; eleven great grandchildren, Isabella, Liam, Hayden, Paxton, Duncan and Nolan Nimm, Eli Andrews, Macey and Fletcher Knapp, Noah Best and Elodie Buenaflor; two step-grandchildren, Morgan McKee and Gavynn Parker. He is also survived by a sister Dorothy Olson of Denver, CO, and several nieces and nephews. He was preceded in death by his parents, wife, a sister, Mildred June Petersen, brothers, Roland, Arthur, Donald and Jim. Funeral services will be held at 11 a.m., Saturday, December 12, 2015, at the Bethlehem Lutheran Church, Brodhead, WI, with Rev. Larry Froemming officiating. Burial will be in Greenwood Cemetery, Brodhead. Visitation will be held on Saturday from 9:30 a.m. until time of services at the church. Memorials may be made to the Juda or Brodhead High School Ag. Dept.�

Robert Franklin Keen, age 93, of Brodhead, passed away on Wednesday, December 9, 2015 at Wood&#65533;s Crossing in Brodhead. He was born on Dec. 1, 1922, in Juda, Wisconsin, the son of Arthur and Edith (Asmus) Keen. He married Phyllis J. Guleson... View Obituary & Service Information

The family of Robert Franklin Keen created this Life Tributes page to make it easy to share your memories.

Robert Franklin Keen, age 93, of Brodhead, passed away on Wednesday,...

Send flowers to the Keen family.