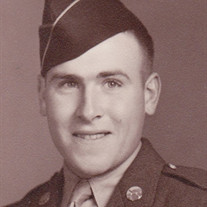 Roger H�Brobst, age 96, of Brodhead, passed away on Thursday, August 3, 2017, at Woods Crossing Nursing Home, Brodhead, WI. He was born on September 2, 1920 in Avon Township, Rock County, WI, the son of Harry and Emma (Badertscher) Brobst. Roger was united in marriage to Ruth Nenneman on February 17, 1950 in Janesville, WI. Roger was a WWII Army Veteran, serving in the 3rd Armored Spearhead Division from August of 1942 until January of 1946 in Ardennes, Rhineland, and Central Europe. He worked for General Motors of Janesville, WI, from May of 1946 until his retirement in January of 1979. He was a member of St. Peter's Lutheran Church, Brodhead, a lifetime member of VFW Post 6858, Brodhead, and was an avid bowler. He is survived by his wife Ruth; a daughter, Vicki (Steve) Krattiger, Brodhead; a sister, Lois Zingle, Lake Geneva, WI; sisters-in-law, Dorothy Nenneman, Brodhead�and Nancy Montgomery, Janesville; special friend, Joyce Nipple, Brodhead; and several nieces and nephews. He was preceded in death by his parents. Funeral services will be held at 11 a.m. Wednesday, August 9, 2017, at St. Peter's Lutheran Church, Brodhead, WI, with Rev. Mark Neumann officiating. Burial will be in Greenwood Cemetery, Brodhead, with military rites. Visitation will be held from 10 a.m. until time of services at the church.�

The family of Roger H Brobst created this Life Tributes page to make it easy to share your memories.

Roger H�Brobst, age 96, of Brodhead, passed away on Thursday,...

Send flowers to the Brobst family.