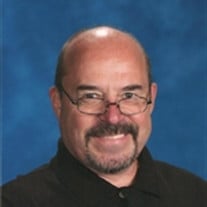 Roger V. Landry, Brodhead/Monroe, age 55, died unexpectedly July 29, 2012 at home. He was born in Ft. Wayne, Indiana on Sept.11, 1956, the son of Virgil and Anita Landry. He attended Jackson High School in South Bend, Butler University in Indianapolis, and Ball State in Muncie, all in Indiana. He began his coaching and teaching career at Hamilton Heights H.S. in Arcadia, Indiana. In 1987, he moved to Wisconsin to teach science and also to coach wrestling and football at Brodhead High School. Roger was a three sport athlete in high school and always wanted to be a teacher and a coach. He was passionate about his work as a teacher and coach. He always worked at helping students understand concepts and think, not just memorize facts. He also took great pride in teaching cutting edge science and loved taking students to the library to find current scientific literature. His passion for science also went beyond the classroom and was reflected in his love for the wilderness of Alaska, where he visited many times. He is survived by his children, Anna and Ryan Landry of Evansville, WI; his former wife Nancy Greve Shannon of Evansville, WI; his parents Anita and Virgil Landry of Madison, WI; his brother Greg (Ann) Landry of Middleton, WI; his nieces Kerry Landry of San Francisco, CA and Megan (Sean) Stalpes of Minneapolis, MN. The family will hold a public memorial and celebration of Roger�s life on Saturday, August 4, 2012 at 11:30 a.m. at the Brodhead High School . Visitation will be from 9:00 a.m. until time of the service at the high school. In lieu of flowers, memorials can be made to the Roger V. Landry Scholarship Fund for future Brodhead H.S. graduates. Memorials can be sent to Sugar River Bank 2006 1st Center Ave, Brodhead, WI, 53520. Please click here to view the video tribute

The family of Roger V. Landry created this Life Tributes page to make it easy to share your memories.

Send flowers to the Landry family.