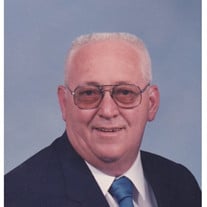 Obituary      Roger L. Lentz, age 88, of Monroe, formerly of Brodhead, passed away on Sunday, December 9, 2018, at Pleasant View Nursing Home.   He was born on August 18, 1930 in Hanover, WI, the son of Fred and Anna (Paulson) Lentz.  He married Phyllis C. Zahn on November 12, 1960 in Rockford, IL.        Roger owned and operated the Mobil Service Station in Brodhead for many years.  He was a member of the United Methodist Church of Monroe, The Brodhead American Legion Post 197, and served as an Alderman for the City of Brodhead for 4 years.  Roger had also served in the U.S. Army National Guard.  He enjoyed woodworking and gardening in his spare time, and especially being with his grandchildren and great-grandchildren.      He is survived by his wife Phyllis, Monroe; his children, Dale (Nancy) Lentz, Brodhead, Lori (Jeff) Balch, Orfordville; a sister, Lucile Roesler, Milwaukee, WI; six grandchildren, Stephanie Schwartzlow, Kasey Mielke, Justin and Haley Balch, Paul and Andrew Lentz, and eight great-grandchildren.  He was preceded in death by his parents, a son, Gary Lentz, a grandson, Jordan Balch, a brother, Lester Lentz, and a brother-in-law, Marvin Roesler.      Funeral services will be held 11 a.m., Saturday, December 15, 2018, at the United Methodist Church, Monroe, WI. with Rev. Randy Booth officiating.  Burial will be in the Plymouth Cemetery in Hanover, WI.  Visitation will be held from 9:30 a.m. on Saturday until time of services at the church.   To send flowers to the family or plant a tree in memory of Roger Lloyd Lentz, please visit our floral store.

The family of Roger Lloyd Lentz created this Life Tributes page to make it easy to share your memories.

Send flowers to the Lentz family.